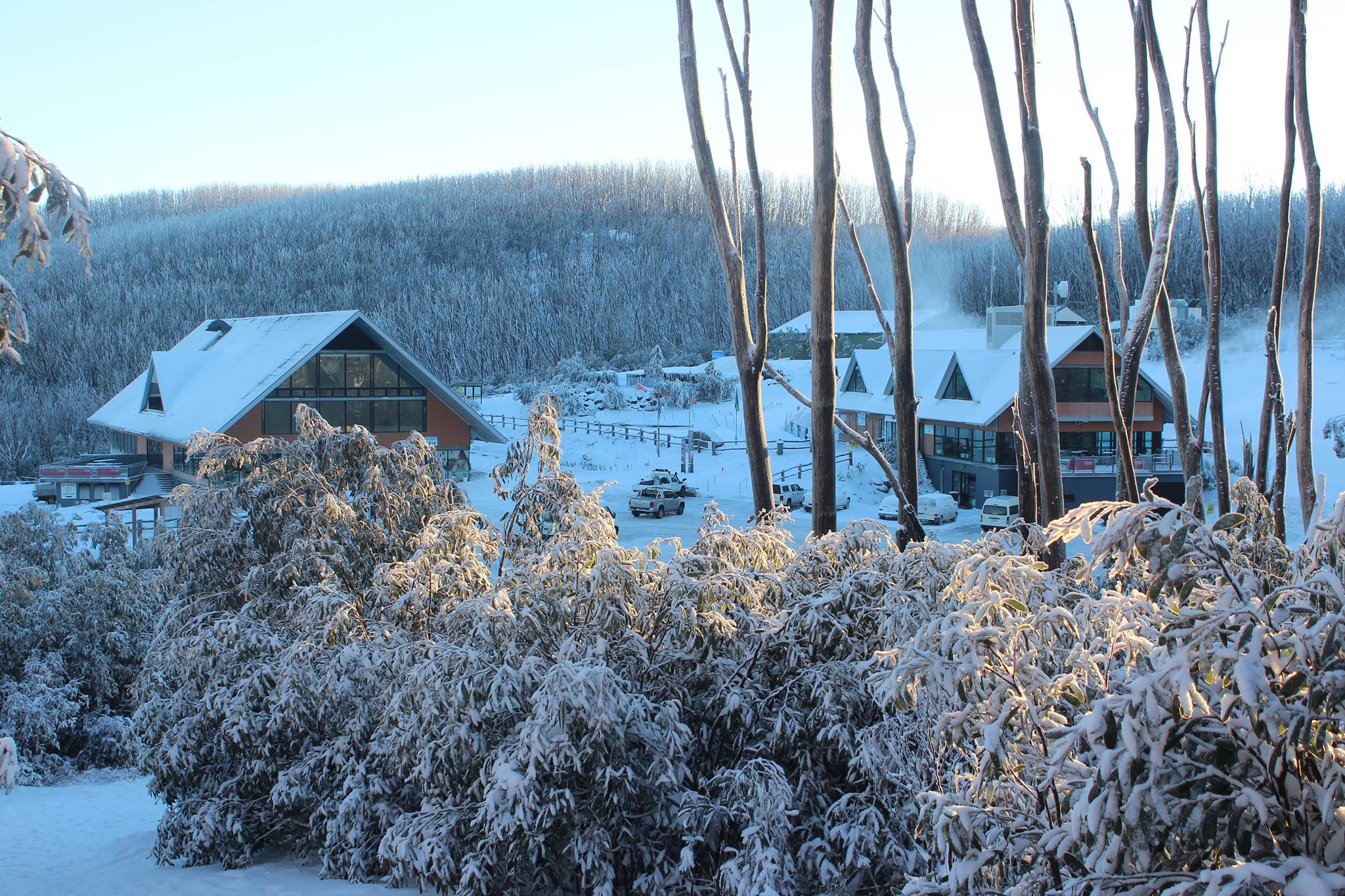 Squinting through the fog, I strain to pick out the girls from the sea of people at the top of the toboggan run. There are two problems with this: one, the fog is so thick I can barely see the fingers on my outstretched hand before me; two, it seems like every other child on the mountain is dressed in the same pink and blue checked Aldi ski-gear.

Eventually, I locate my eldest just as she pushes off from the top of the slope, whooping as she descends… then bashing into some poor soul’s shins at the bottom. I race after her, signalling apology to the cross guy rubbing his wounds.

It is an early start to make it to Lake Mountain Alpine Resort before the crowds descend. I had been warned to arrive early as admission to the resort closes after the day’s limit of cars is reached. Waking the family at 5.30am isn’t easy, especially when the kids have finally achieved the Holy Grail of sleep and regularly sleep through the night. The promise of snow and a day on the slopes is an easy bribe. The words, Frozen, Elsa and Anna may have been mentioned to entice them from their slumber.

After a quick breakfast and a few squabbles about the suitability of glittery tap shoes on the snowfields, we head off for our first frolic in the snow in Australia. 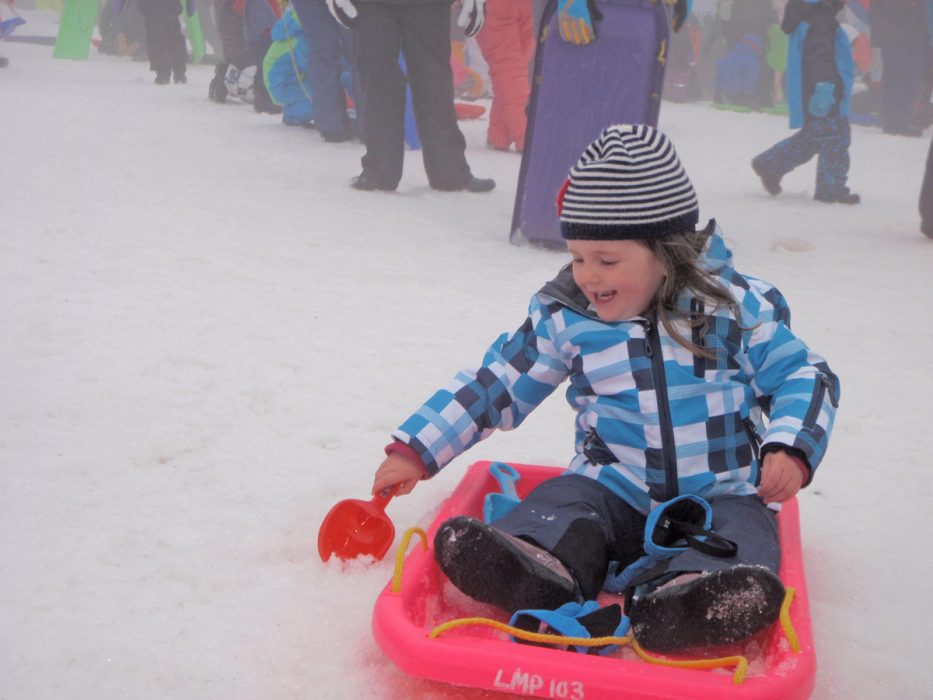 First play in the snow… but she’s not sitting in it!

Lake Mountain Alpine Resort is the closest snow field to Melbourne, about 90 minutes’ drive from the city, and although it doesn’t cater to downhill skiers it is the centre for cross country skiing in Victoria. Visitors can also try their hand – or foot – at snowshoeing, tobogganing and good old snowman making.

The road to Lake Mountain runs through the alpine township of Marysville. In 2009, this sleepy mountain village suffered terrible devastation by bush fires. I hadn’t visited before, but could see the area slowly rising like a phoenix from the ashes, better than ever before. New builds dot the valley, the new Vibe Hotel recently opened and the trees show signs of life once again.

Winding through the blackened trunks of the forest pines, we join the end of the queue of cars creeping their way up the side of the mountain. It’s busy already. Obviously everybody else has received the same information about arriving early. As we crawl along the road the fog grows thicker. It becomes harder and harder to see the cars in front of us. By the time we reach the resort, great clouds of fog have enveloped the mountain. We can’t see the cars in front of us, never mind the resort building, which we know should be right at the end of the car park.

Taking the cue from other holiday makers, we don our ski gear while hanging off the back of the car and join the procession of people heading further up the hill, wondering what we’re heading towards. Then we see it. Jutting up through the cloud of fog is the steep pitched roof of Lake Mountain Resort. It must be only about 10 metres ahead, yet up until this point there’s no hint of its existence. 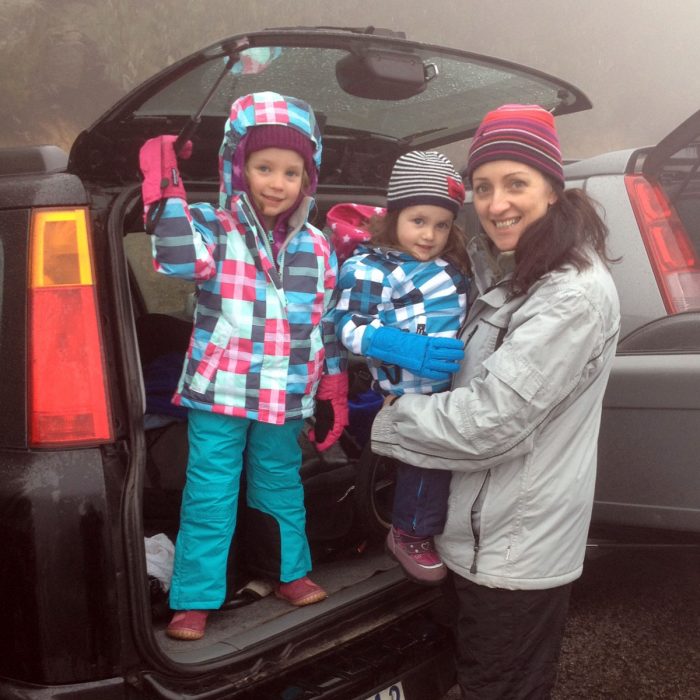 All changed and ready for a day on the snow.

An air of excitement fills the chilly air and it’s evident that many people here have never seen snow before. Well, let’s face it, Australia is not generally known for its blankets of snow. It does, however, have a thriving ski community and a number of popular snowfields throughout the Great Dividing Range. It is also, frustratingly, the most expensive place to ski in the world with the least amount of natural snow fall, so while the ski community is thriving it’s tiny and generally only available to those who are able to sell a kidney. Hey, you only need one.

Shuffling along the icy path we find the equipment building and get in line to borrow some snow boots and collect a couple of toboggans before making our way to the mini slopes outside. We soon realise Lake Mountain is immensely popular – people are packed on the snowy slopes like Emperor penguins. We zig-zag through the crowd to the top of the slope, feeling like human skittles as out-of-control toboggans whizz past. The atmosphere is buoyant and families are making the most of their corner in the snow. Snowmen of all shapes and sizes dot the field. There are Olafs a-plenty and few show-offs stand proudly beside their igloo-like caves.

Staying together is a challenge so we mark our territory with a broken stick, tie a coloured string to the top and stick it in the ground. It is tempting to ask the grandparents to guard the spot and stay here while we scoot off to find the toboggan run, but instead I ask them to keep moving and jiggling just in case hyperthermia sets in! 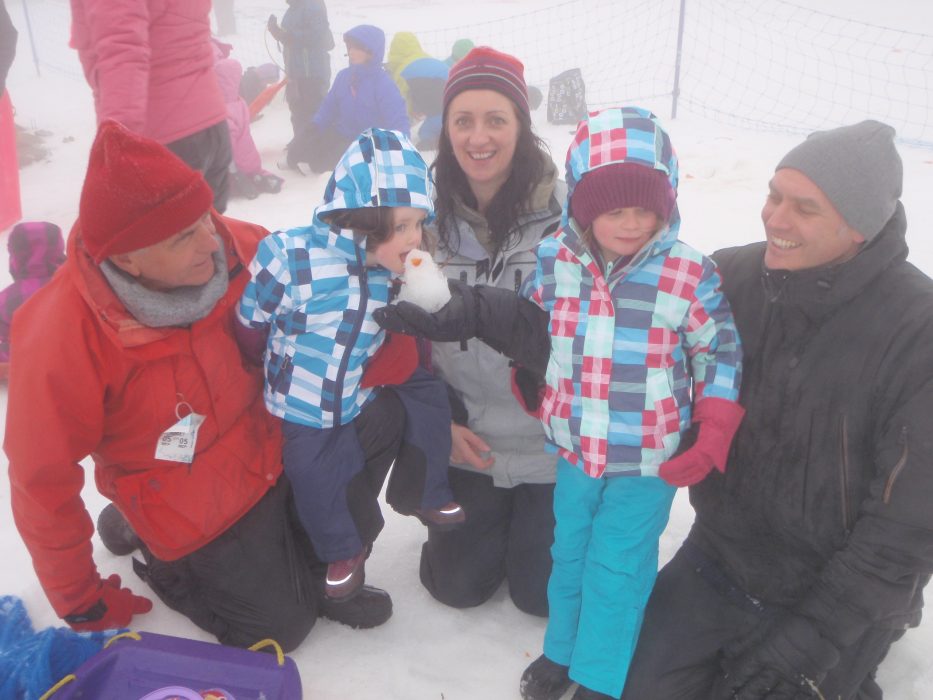 Trying to get a decent family shot is never easy!

It is at this point we realise the eldest has gone missing. We’d been attempting to get it together for the first run down the slopes on the toboggan. I thought it best to sit in the sled with her for the first time so I could show her how to manoeuvre the tub and make sure she doesn’t go careering into the fence at the bottom – not that you can see where it is, we just know it’s there from having passed it.

Quickly scanning the crowd of identical outfits and same-sized children, I eventually spot my crazy cat, but not before she goes whooping down the slopes. Thankfully, the padded outfit helps with the inevitable crash at the bottom. Over and over again, she repeats the whoop and sled ride, never tiring of the climb back to the top, always with the same amount of gusto as the first time. More fool anyone standing at the bottom of the slopes… and there seemed to be an awful lot of fools that day!

The youngest isn’t as impressed with this cold, wet white stuff. Bearing a remarkable resemblance to Maggie from The Simpsons, she’s standing with her arms outstretched to the sides, her legs forced slightly apart in oversized ski gear with a little too much padding. And she’s crying. Not uncontrollably, just whimpering and wailing every now and again when her glove falls off and exposes her tiny delicate hand to the bone-shattering icy air. She can barely touch the snow and just sits frustrated when her way-too-big gloves prevent her from doing anything. Thankfully, she is eventually wooed the promise of a hot chocolate and enjoys a few mini runs on the sled. 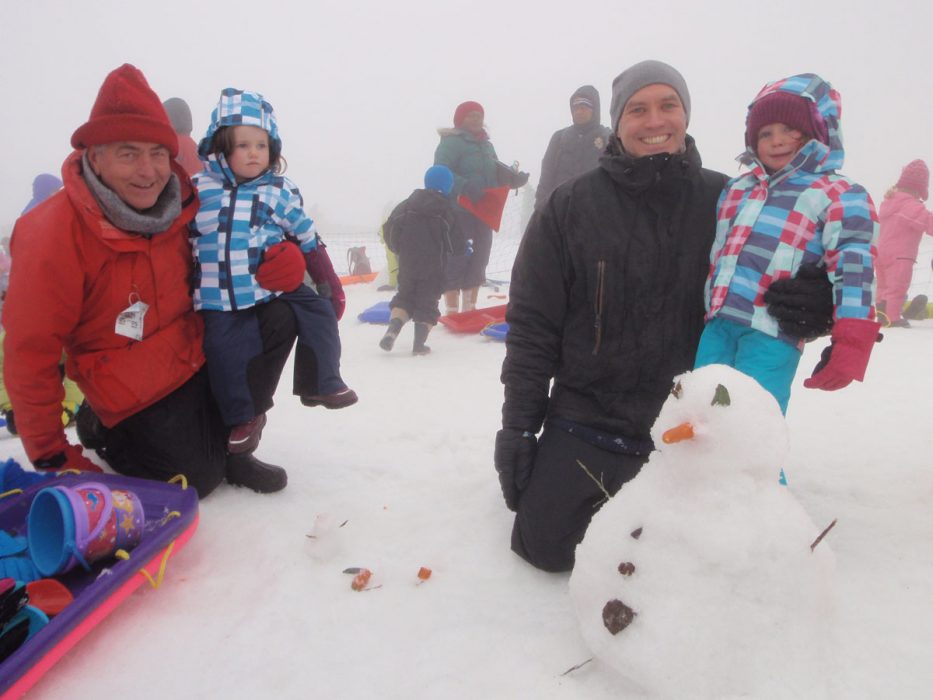 Very proud of our snowman. You can tell Lottie is having a great day!

The fog grows thicker and it starts to drizzle, making it hard to stay outside for too long. We seek shelter and warmth in the dining hall, which is a huge place, but nowhere near big enough for the crowds here today. Eventually we spot a free chest-high table and make a beeline for it. There are no seats, but enough elbow room for all but the kids to take a load off.

The queue for food and drink is overwhelmingly long, but there is only one place to eat and drink on the mountain and this is it so there’s not much choice but to be patient. There are the usual fish and chips, burgers and sandwiches for sale; coffee, tea, soft drinks and, thankfully, beer and wine, too. 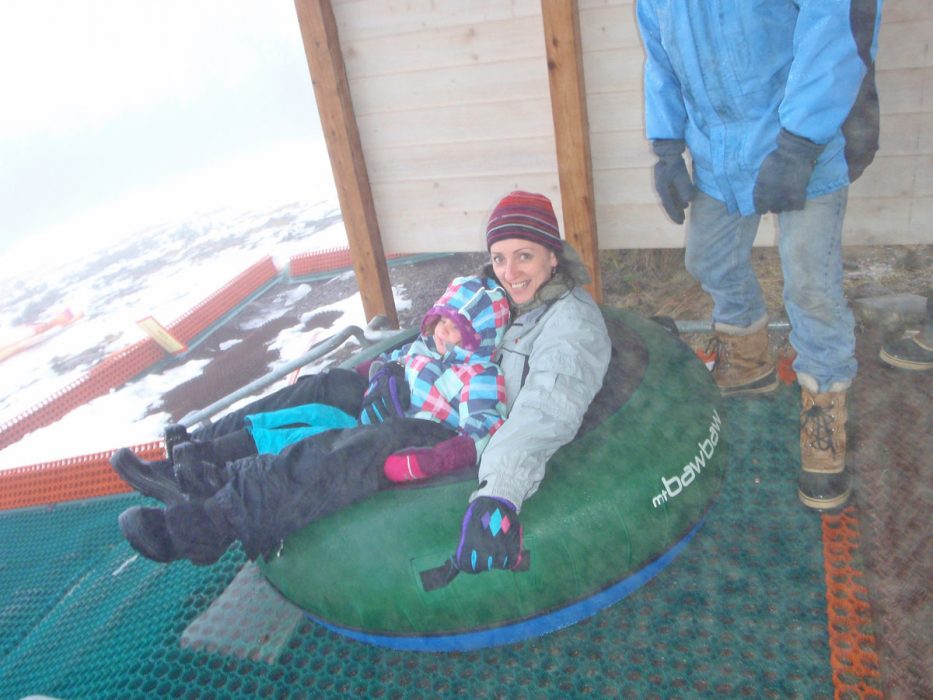 Ready to do down the tube ride.

After replenishing the system we seek out the tube ride. Oversized tyre tubes are the mode of transport here. Straddling the tyre, I take Miss 4 on my lap and lay back. Giving a thumb up to the attendant, he pushes us off from the top of the run. The patchwork rubber trellis lining the length of the run makes the perfect slide for tyres and sends us speeding down the slope. It’s the most fun you can have on the mountain without having to touch snow at all. We do it three times, despite the insistent drizzle and threat of chilblains.

Next, we have a go at snowshoeing. Our budding little Lydia Lasilo is keen to try it too, so we strap on a pair over snowshoes each and venture off to the trails behind the toboggan run. The snow here is about half a metre thick and pristine – for the most part – so we take our snowshoes off and have some fun treading through the deep snow-covered undergrowth, making snow angels and pretending to be 10-year-olds again.

Back at the ranch, we discover the bubba has been asleep in Grandad’s arms for the past two hours and wakes up just as we’re about to leave. She doesn’t seem the slightest bit bothered about that. In fact, I’m not sure if there was a slight smile on her tiny lips. She happily hands back the snow boots and can’t wait to get her own clothes back on. Meanwhile, Miss 4 insists on wearing her snow gear home because she needs to practice her moves when she gets back to the house in preparation for the next snow adventure.

How to get there:

Take the State Route 40 via the Maroondah Highway from Melbourne, through the Yarra Valley and Healesville towards Marysville. There are good instructions on the Lake Mountain Resort website.

If you’re staying in Marysville, you can catch the Snow Bus from there to Lake Mountain. Departs Marysville at 9am and returns at either 1:30pm or 3pm.

The snow season is short in Victoria. Check the snow reports, but usually the best time to go is July through to early September. I visited Lake Mountain with my family on one of the foggiest days of the season. It was reported there were 4,500 people on the slopes that day, but it was hard to see the crowds through the fog and drizzle. However, the weather did not put us off from having a good time.

Lake Mountain is open all year round, so you can go and enjoy day hikes during the warmer months.

There is nowhere to stay on Lake Mountain. The resort closes each day. There are lots of accommodation options nearby in Marysville. I can recommend the Vibe Hotel in the town. There are a number of holiday homes available to rent, too. The area is still recovering from the devastating bush fires of 2009 and depends on tourism so choosing to stay here really helps give back to the community.

If you do go, enjoy and stay warm!