Rubbing bleary eyes, I gurn and moan to myself about the ungodliness of having to get out of bed at 3am.

Generally, the only way I’m up at this hour is after a night out. That’s acceptable. What is not so acceptable is being talked into doing a trek up the side of a still-smouldering volcano, agreeing to it – under duress – only to discover the intrepid adventure requires a 3am start.

Yep, you’ve guessed it; I’m not a morning person. Never was, never will be.

On the upside, having my grumpy face on this particular chilly morn means fellow trekkers give me a wide berth, automatically negating the need for small talk. Small joys!

We are staying in a small hotel in Bromo-Tengger-Semeru National Park in East Java, on the edge of a 10km wide volcanic caldera. Within the caldera, known locally as Tengger Massif, are two active volcanoes, Mount Semeru and Mount Bromo – Indonesia’s most active volcanoes, the latter of which erupted in January 2011. 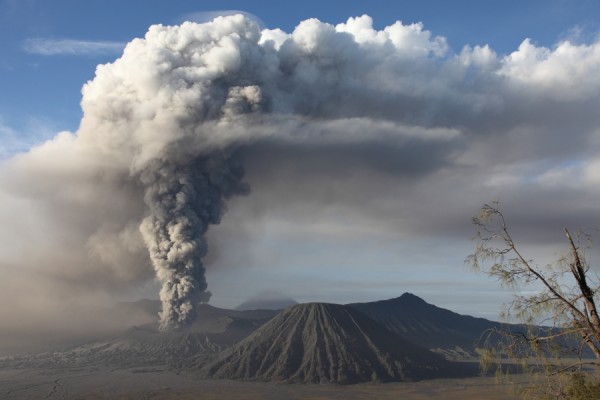 It was this volcano I was about to trek to. In the dark.

I can’t say I’m a massive trekking in the dark person. Don’t get me wrong, I love a good trek, but usually I like to see where I’m going. Obviously, not everyone is of the same opinion as a handful of die-hard trekkers set off, gingerly feeling their way down the path.

I quietly raise an eyebrow, watch, and wait.

It takes about one minute for the first tumble down the steep slope. Is it wrong I have a slight smirk on my face? I put it down to sleep deprivation.

I go for the sensible option and wait patiently for a flashlight, fully expecting the tour guide to diligently hand them out to the group. And indeed he does. Four of them… for 12 people! What was I thinking? We’re in Java; they don’t even use headlights on winding roads with sheer drop-offs. What fool would need a flashlight? Phfft!

So – no longer smiling – I fall into line behind one of the lucky light holders and concentrate on nothing more than putting one foot in front of the other. Slipping and sliding as we go, our small group moves slowly down the banking until the ground flattens underfoot.

The freezing fog starts to lift and I can finally breathe without guarding my chest against the chill. Gradually, the light changes; the fog dissipates, revealing the vast, wide plateau of a long-dead volcano. Floating in the remaining cloud, as if a mirage to the weary, sits an impressive temple made of local volcanic rock.

Built by the indigenous people to the area, the Pura Luhur Poten temple is of great religious significance to the Tenggernese. Subscribing to the teachings of Mahayana Buddhism, this little temple has done well to survive many conflicts in Java, probably due to its inaccessibility. Every year, the local believers hold a festival to give thanks to their gods by tossing food offerings into the volcano. 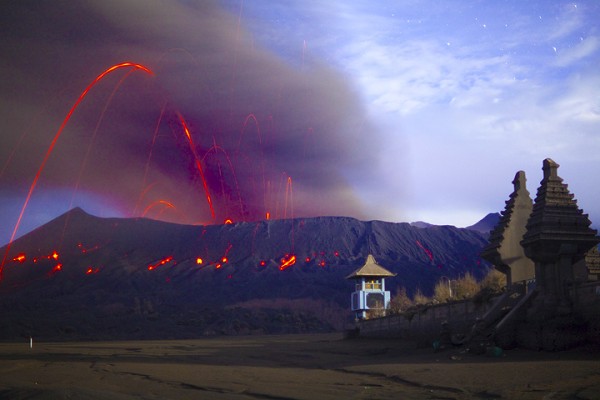 As daybreak approaches, the step quickens. I pound on across the Sea of Sands, thinking of nothing else but getting to the edge of the volcano before sunrise.

It wouldn’t just be a shame to miss sunrise after all the effort exerted to get to the sacred spot, the spot of the edge with your name on it, no, it would be downright annoying.

Then, as if to put my definition of annoying into perspective, falling into line at the bottom of the volcano are four buses. Each one loaded with tourists wrapped in puffer jackets to ward off the early morning chill. And not a bead of sweat in sight.

We watch from a distance as they swagger up the side of the volcano, lining it like little dots of bird poo. We’re too far away for it to make any real difference if we run, yet break into that weird half-running, half-walking mode that gets you nowhere very quickly.

Struck dumb by their audacity, my mind struggles to find the right expletives while I ask myself – and my travel companion – why the hell did nobody mention you could get a bus the whole way up here?

Then, as human nature kicks in, we are awash with renewed vigour and dogged determination. We march right up the side of that volcano, past the poor exhausted ponies ferrying far-too-big-for-them people and up the steep wooden staircase built on to the side of the volcano to nab a prized position on the rim, upwind of the sulphur fumes. Take that, you pesky proud puffer jacket people! 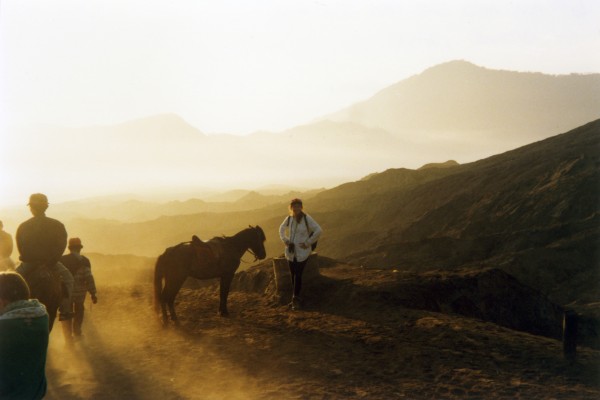 A pony quietly pleading to not make him go up there again!
Image: Linda McCormick/EcoTraveller

Shivering madly, we huddle together for warmth, get the camera poised, and wait for ‘the happening’.

This is where you would normally read about the orange and yellow hues of the rising sun pouring across the horizon like honey-coloured syrup. The rays of the morning sun washing over my face, warming my jubilant yet exhausted heart.

The sun came up. At some point. But it was a bit too cloudy for it to be anything special. The orange and yellows never really appeared, and the only photos I got were filled with grey clouds of sulphur smoke hiding a distant light in the background. 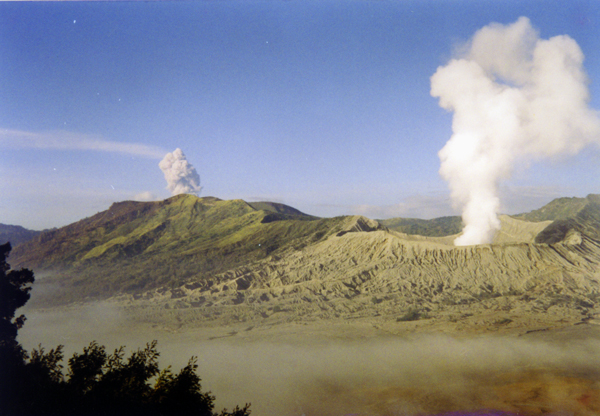 My only decent shot of Mount Bromo.

At the time I remember thinking, “I cannot believe I came all the way for this!” Far too many things had gone wrong to get to this point. I could have avoided the terrible food poisoning on the way here, the cramped conditions on the ridiculously over-filled tour bus, the bus driver with a death wish. I should have gone with my gut.

Yet, many years later, somehow, I remember it mostly fondly. I’m glad I did it. Even for all the complaining at the time. (And there was a lot!) It was an experience. And even though at the time it was one I was wishing I never had, I now put it down to traveller fatigue. We had been on the road for four months, surfaced from Thailand down through Malaysia and Singapore, before crossing to Java.

Would I say it was worth it?

Of course! You need a few rough times to appreciate the smooth sailing when travelling. It’s not about only doing things you know you’re going to love; it’s about trying new things, pushing yourself and testing your limits. Sometimes leaving your comfort zone – yep, even at 3 o’clock in the morning – is a good thing.

Have you ever had a really disappointing travel experience only to remember it differently years down the line? Have you ever been on a trip that really wasn’t worth it, and you wouldn’t recommend doing?

Come on, be honest. It’s cathartic!