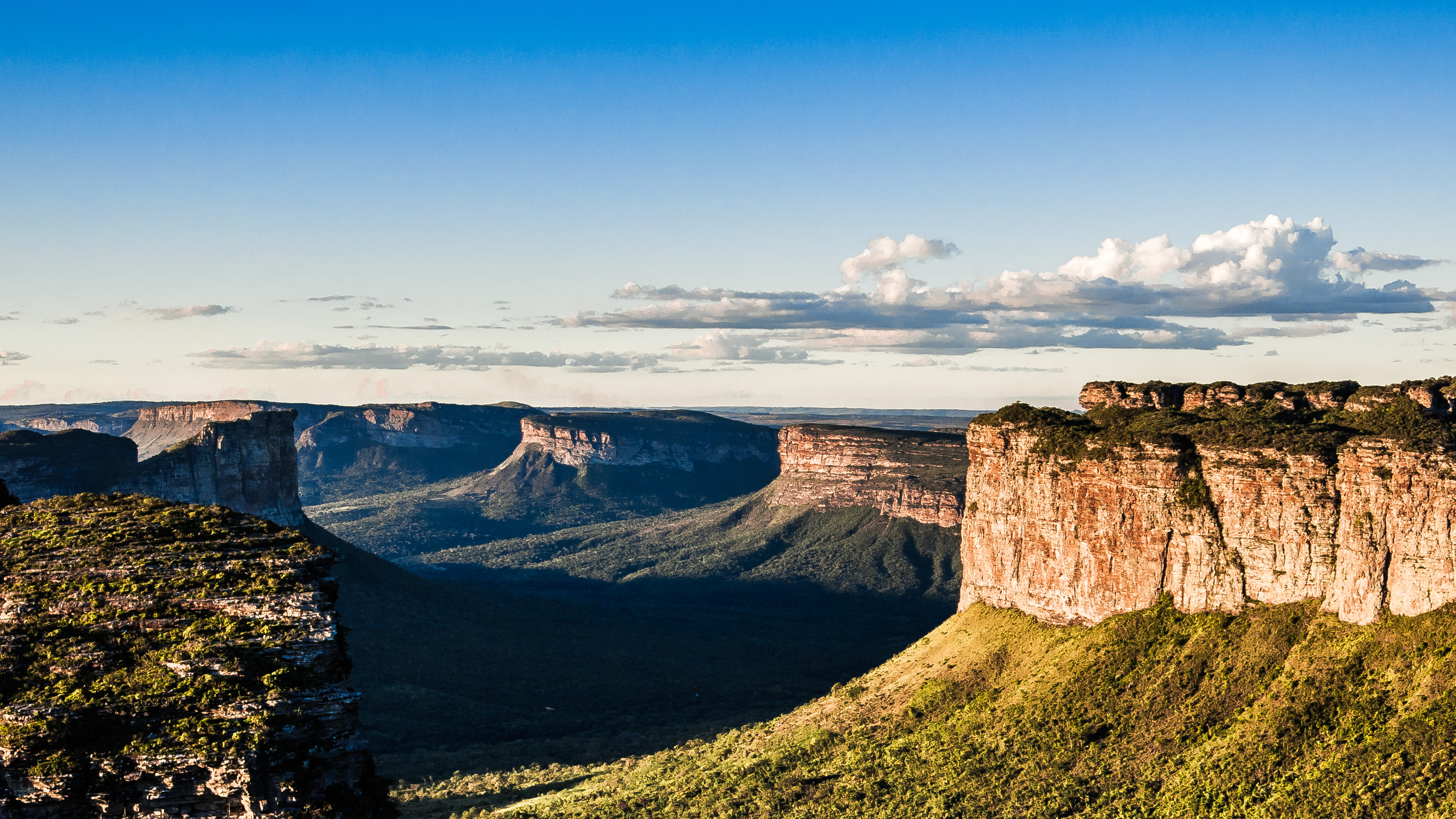 I decide to go to Bahia, Brazil while listening to Caetano Veloso’s “Alegria, Alegria” (“Joy, Joy”) on my living room couch. Veloso’s voice rings out “Eu vou, Porque nao porque nao?” which translates to “I go, why not why not?” Veloso’s hit song and debut self-titled album came out in 1968 while the military dictatorship still gripped Brazil. Censorship and exportation were very real threats at the time, so artists had to be careful. Veloso later told the New York Times: “It was against the dictatorship without saying anything about it.” The spirit of resistance through music, metaphor, and wit immediately sparks my interest in Brazil, particularly Bahia, where Veloso was born. Besides, Veloso is practically telling me, “Go! Why not?”

It does not take long after exiting the airport to get swept up in the brilliance and color of Salvador, Bahia’s capital and the very first capital of Brazil. West African traditions are kept alive here, both in tourist trinkets and genuine local churches and traditions. Candomblé, a popular Brazilian religion, was born here in Salvador. The unique religion is the result of enslaved West African priests keeping their knowledge alive in a Catholic country. Candomblé is a combination of West African beliefs, Roman Catholicism, and Indigenous practices.

I take a midday stroll through Pelourinho, Salvador’s historic neighborhood and primary tourist area. Winding roads, colorful buildings, and charming churches fill my afternoon and a local man hands me a small cotton bracelet that says, “Lembrança do Senhor do Bonfim da Bahia” (Remembrance of the Lord of Bonfim of Bahia). This is referring to a famous catholic church just north of Pelourinho,The Church of Nosso Senhor do Bonfim, definitely worth a visit. 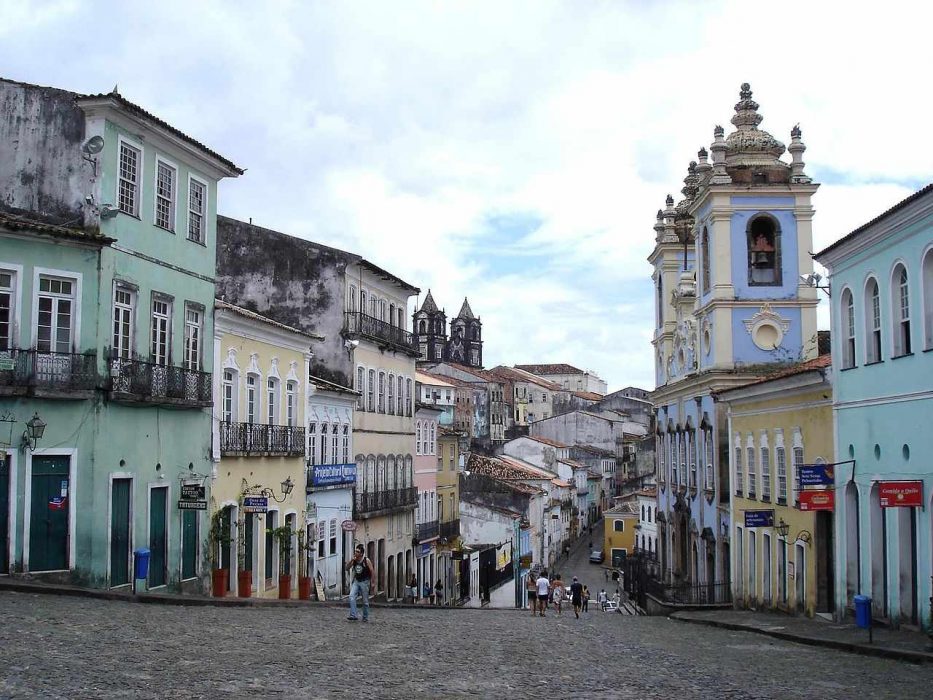 Unique churches and historic buildings are not all that makes Salvador special, not so far from Pelourinho is the Forte da Capoeira where you can see local Capoeira schools perform. Capoeira is a martial art that combines acrobatics and dance. The artform was created to spread knowledge among slaves on how to defend themselves, but they could not risk tipping off the master’s, so the practice was developed using music, and appears as a dance rather than a dangerous form of self defense.

By day Pelourinho hums with activity, but by night it is fairly quiet. Many people stay in or around Pelourinho, but I decide to stay in Barra because locals advise me that it is a safer area after dark. Plus, it is right on the beach. The sun is setting as I arrive in Barra, and the colorful, hot, and bustling beaches calm down as a rare drizzle sweeps over the city. While most run for shelter, I take advantage of this refreshing mist by unstacking some plastic stools and posting up next to a humble acarajé stand that overlooks the sea. I bite into my acarajé, a tasty little sandwich made with fried beans and stuffed with spicy pastes and fresh shrimp- a local street food I will definitely be missing when it comes time to leave Brazil.

All day, beaches in the Barra neighborhood were packed edge to edge, but now it is much calmer as people head home to prepare for a late night in closeby party area, Rio Vermelho. Every Friday or Saturday night Rio Vermelho is filled with people. There is no need to worry about which bar to go to, the party is in the streets, so later that night I grab a cold beer and mingle with some locals.

After Salvador I venture north up the Coconut Coast to Arembepe, known for its “hippie village” that was visited by many celebrities (like Janis Joplin!) in the late 1960’s-70’s. Set apart from rest of the town, Aldeia Hippie feels more like a calm music festival camping ground than an actual village. Local ‘hippies’ greet me with warm smiles and hugs, guiding me to a vast array of unusual hand carved crafts. The charming and warm-hearted hippies peel carrots and chop potatoes for dinner while simultaneously showing me how each and every one of their crafts (including necklaces and walking sticks) can be used for smoking, uh, tobacco. 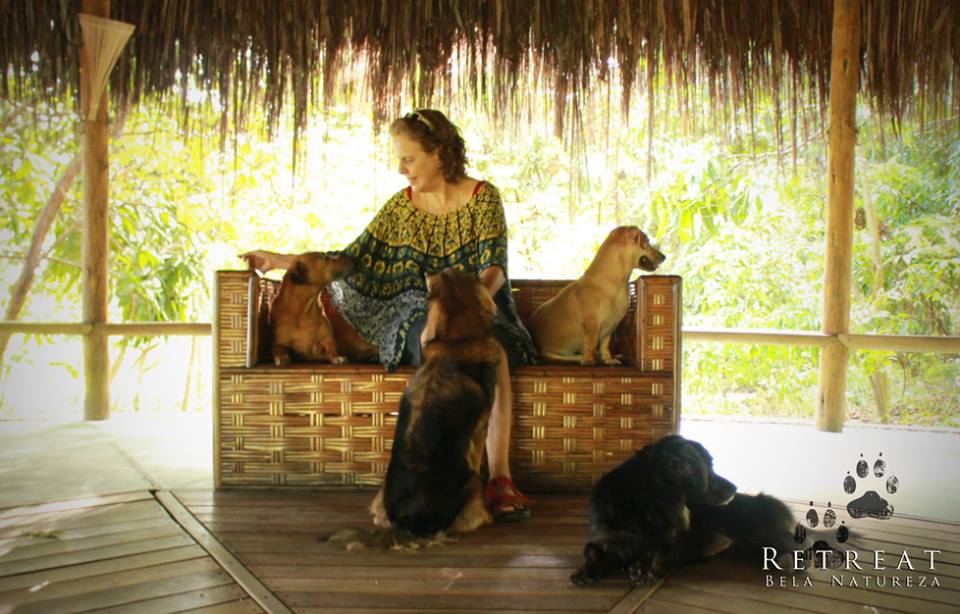 I am a dog lover, and to my surprise, I find a nearby retreat that has fifteen “healing” dogs.
Retreat Bela Natureza is tucked away behind a tall gate in a little village close to Arembepe called Coqueiro (coconut tree). Upon opening the gates, I am instantly swept away into what feels like a natural forest, but with pleasant little pathways, adorable eco-lodges, and lots of dogs. The retreat is very diligent about recycling, composting, and reusing everything they can. The eco-lodges are constructed in a traditional Native Brazilian adobe style, so it doubles as educational and eco-friendly. The dogs were also lovely to be around, and they even joined us in morning guided meditation sessions!

A hop, skip, ferry, and six hours on a bus later I am in Itacaré on Bahia’s Cacau Coast. For many years Itacaré was an average fishing village, until around the 1970’s when it was popularized for its beautiful beaches and excellent surf. Today, you can roam around Itacaré and shop from a wide selection of handmade jewelry made by local or traveling musicians and artists.

I see a quaint restaurant painted red with bubbles fluttering around happy customers, so I decide to grab my dinner there. The place is called Aqua, and their affordable vegan and vegetarian dishes of the day become a repeating favorite of mine in Itacaré. In general, Itacaré has an impressive selection of
vegetarian and vegan friendly restaurants, which is somewhat of a rarity in Brazil. 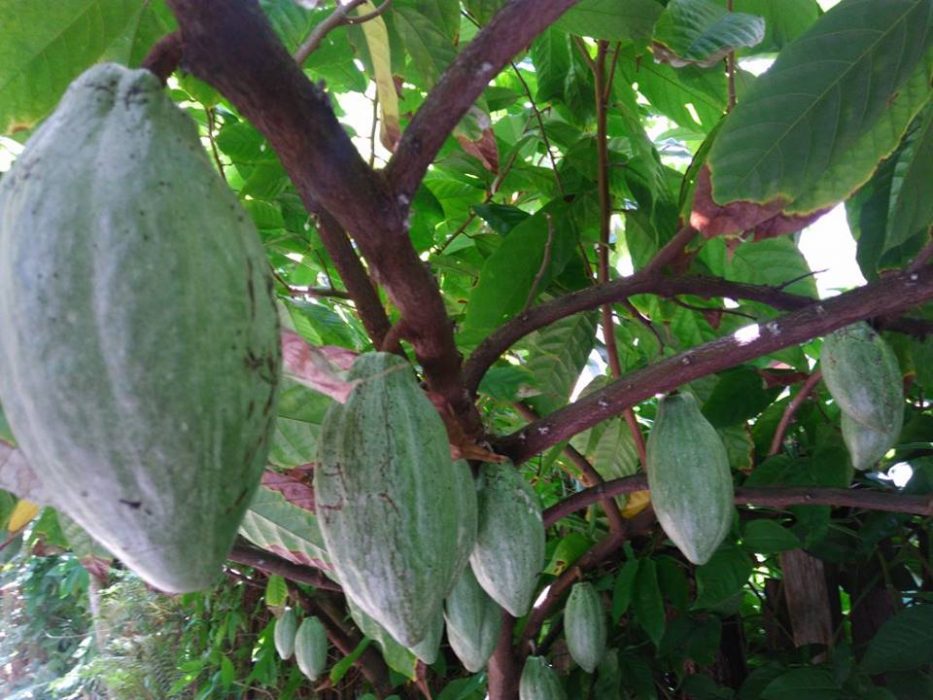 There is one small beach right in town called Concha beach, and four more lovely beaches just a short walk away. After exploring all of these beaches, I pack some snacks and a water bottle for a hike through the jungle to discover the next beach over, Prainha. The hike is about 30-40 minutes through the jungle and is easy enough to do in my flip flops. The view of the beach just before arriving already makes the trek worth it, and Prainha turns out to be one of my favorite beaches in Bahia. Some people feel more comfortable with a local guide, but it is fairly easy to figure out on your own as well. Just be sure to go with a friend or two and head back into town before sunset.

I grab some local chocolate and fresh cacau juice before making the journey over to perhaps the most beautiful area of Bahia: Chapada Diamantina. 15,000 square miles of breathtaking landscapes, crystal blue pools, mysterious caves, and glorious waterfalls? Yes please. If you are going to Bahia, Chapada Diamantina is a must. The most popular home-base in the region is Lençóis, which is a charming little city with a few of its own hiking trails, great shops and restaurants, and no shortage of guided day tours and multi-day excursions. Although Lencois is definitely worth a visit, sustainable travelers are more likely to fall in love with Vale de Capão. This area is filled with the positive energy of people from all over the world who share common values of respect and love for nature. You will not find any luxury hotels here, because the prevailing mentality prioritizes a humble, respectful, and conscious relationship with nature. 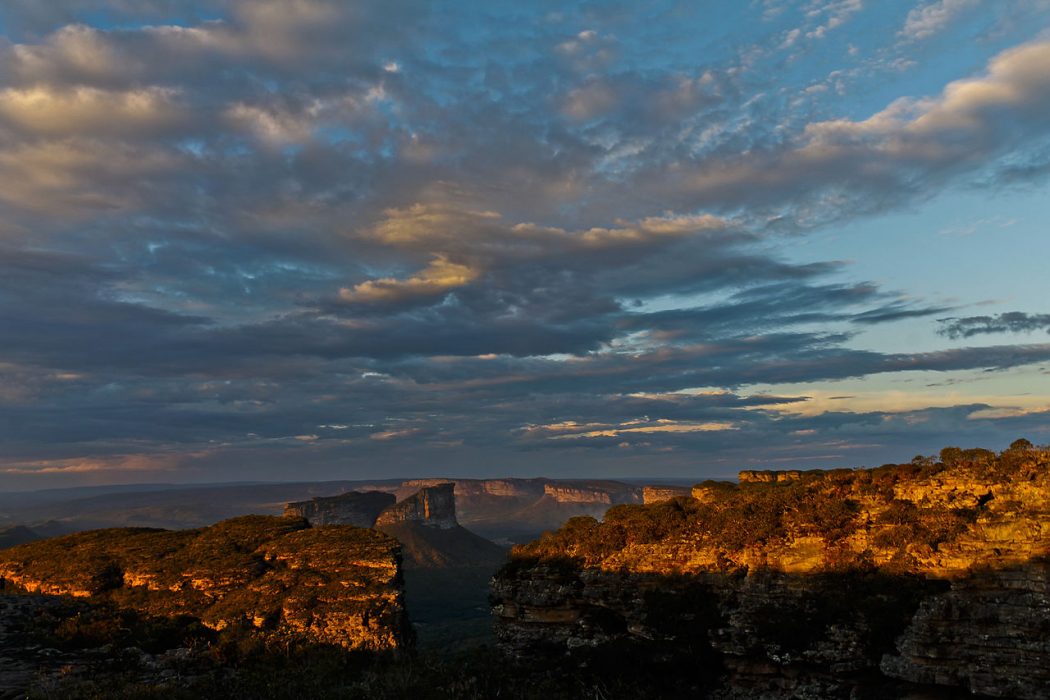 The sunset around the morro do Pai Inácio

On my last day in Chapada Diamantina I go with a group to hike up Pai Inácio Hill and watch the sun set. The colors sprawl over seemingly infinite land and I can do nothing but sit silently in the beauty of Bahia. One of the locals sits next to me and gazes out at the view. He tells me that he has lived in Chapada Diamantina his whole life, and like many other locals, he makes his money giving tours. Then he says to me, “In most places people have choices, but here you can have freedom.” I am not sure I know exactly what he means, but I am reminded of lyrics from “Alegria, Alegria”, the song that brought me to Bahia in the first place:

No books, no rifle
no hunger, no telephone
In the heart of Brazil
Without a handkerchief and papers
Nothing in my pockets or hands
I want to keep on living, love
I go…
Why not? why not?