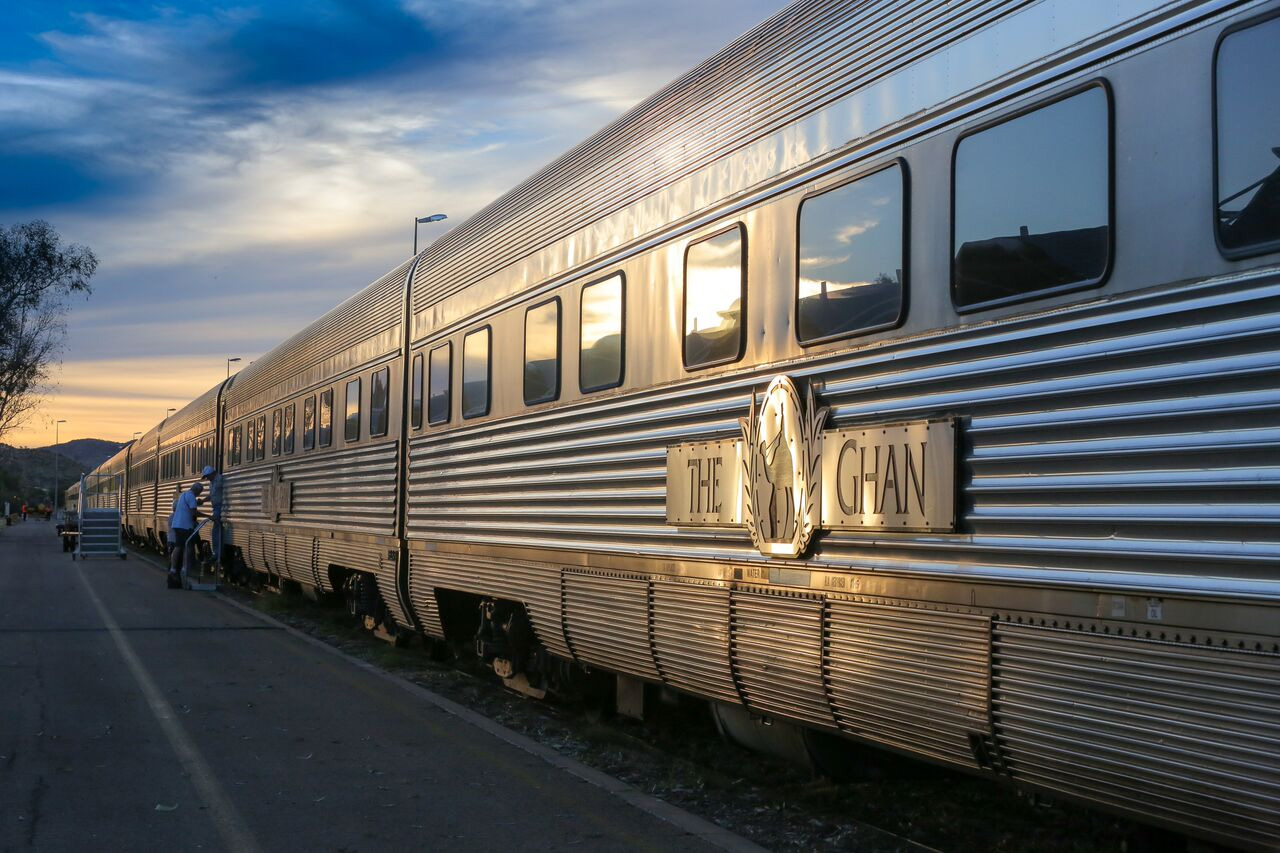 Whether it’s the gentle sideways undulation of the train on the tracks that makes rail travel so incredibly relaxing or the fact that, until you reach your final destination, there is nowhere else you have to be but right there in your seat, it’s easy to sit back and revel in the moment. Add great food and wine into the mix and you have an unholy Mary Poppins type of experience – practically perfect in every way.

There are so many wonderful culinary train journeys available throughout the world, it is much too hard to whittle out the best five. Instead I have opted for five train journeys I have either taken or are on the neverending list of things to do.

Travel through Russia and China in style on the world’s longest railway, the Trans Siberian. Connecting Moscow in the west with Vladivostok in the east, the private Grand Trans Siberian Express melds culinary experiences with sightseeing in some of the lesser visited cities in the Northern Hemisphere.

Travellers join the Trans Mongolian Railway at Ulan Ude heading on to Peking through the grasslands and dunes of the vast Gobi Desert. Three dining cars offer local Russian, Mongolian and Chinese delicacies. While it’s not the Orient Express, the food served on board is still a higher standard than that served on Trans Siberian trains so it’s worth the extra cash if the bank balance allows.

Cost: $15,495 per person, based on double occupancy; for the Imperial Suite, $29,995 per person. Travel is between Vladivostok and Moscow. Trip includes 13 nights on the train and two in a hotel. 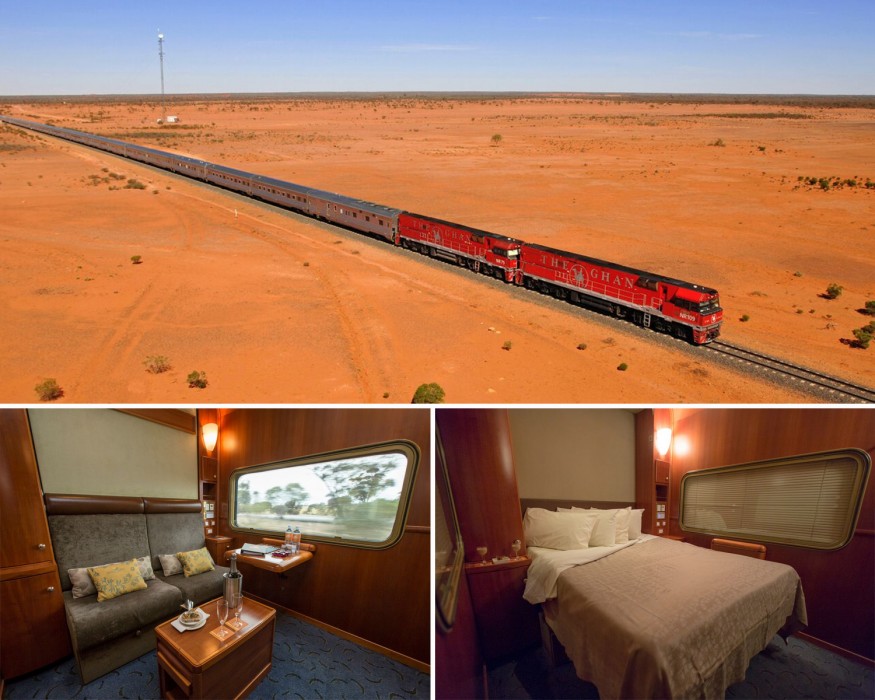 Although it takes a few days to travel from Darwin, at the top of the country, to Adelaide, at the bottom, one of the most exhilarating ways to see Australia is on board The Ghan.

Originally named the Afghan Express, after the Afghan cameleers who once travelled the same route through the Red Centre, The Ghan carried supplies to some of the most unreachable places in the outback in the early 1900s. Today, it offers a spectacular way to see the heart of Australia in all her russet glory.

There are various levels of service available on board, depending on your budget, with optional side trips and excursions at various stops along the way. The Red Service, popular with budget travellers, offers recliner seats and access to two cafes on board. Guests on the Gold Service can enjoy access to the Queen Adelaide Restaurant, where on-board chefs prepare a seasonal menu using fresh local Australian produce. If you’re seeking a high-end culinary experience then opt for the prestigious Platinum Service, offering in-cabin breakfasts, drinks served in your private cabin and access to the recently launched Platinum Club, which promises “a dining experience like no other.”

What culinary train listing would be complete without the best-known train journey in the world, the Orient Express? The epitome of glamour and decadence, the Orient Express offers travellers an opportunity to travel the breadth of Europe while indulging in beautifully-prepared haute cuisine and fine wines.

There are no less than three restaurant cars laden with delights conjured up by the in-house French chefs, and if three meals a day does not suffice there’s a 24-hour dining carriage to ensure no one goes hungry.

Belmond, who own and operate the Venice Simplon Orient Express, announced a few weeks ago it will celebrate the pioneering days of rail travel in June 2016 on an inaugural rail journey to Berlin, connecting with the historic European capitals of London, Paris and Berlin.

Marvel at the Arabic influenced architecture of Seville, Cordoba, Granada and Jerez while being wined and dined on this luxury train fit for royalty – Al Andalus was once used by the British royal family on their yearly trips from Calais to the South of France. The train now takes guests on a seven-day, six-night return journey from Seville, visiting various UNESCO World Heritage sites en route through the Andalucian countryside.

The Al-Andalus boasts two dining cars, the Alhambra and Gibralfaro, seven deluxe sleeping cars, five of which date back to the 1920s, and for those seeking light entertainment there are separate bar and games cars to while away the traditionally late nights. A buffet breakfast is served daily, two lunches during the trip and dinner every evening, accompanied with wonderful local wines. 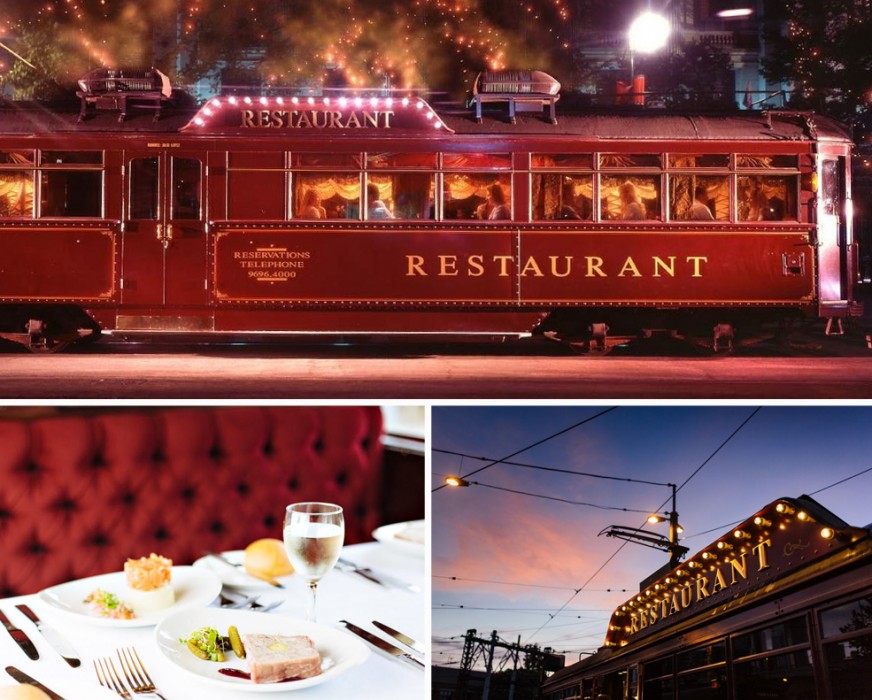 For something completely different, why not try a uniquely Australian dining experience – The Colonial Tramcar Restaurant in Melbourne, Victoria.

Refitted in burgundy velvet and brass, these 1920s historic Melbourne trams set off from south Melbourne every evening on a three-hour round trip through the city’s streets. Three staff on each tram provide a friendly and intimate service while you sit back, relax and enjoy a five-course meal accompanied with fine Australian wines.

This innovative dining affair is popular with visitors so bookings need to be made up to six months in advance. Get planning, and enjoy.

What is your favourite culinary train journey?