“Don’t worry,” I said. “If we get a GPS with the car, there’s no need to come and collect us from the airport.”

I love my optimism.

As I manoeuvred the bus-like rental car through the narrow Roman streets of Tiana, I was so thankful Anna insisted she led the way. Indicating left into an even narrower dirt road, with no signage or lighting, I was glad I let manners win over independence.

A voice from the back seat questioned, “Mummy, why are we going away from the lights? It’s too dark here. There’s nothing here. You need to go back now.” Three-year-old decisions often sound so right, but then, she didn’t see the pictures of our final destination. I knew that somewhere in this darkness a magnificent 14th century farmhouse was waiting for us.

Past the old cemetery and round to the right, up past the orchards and above the olive groves, Anna drove with the assuredness of someone who has made this trip in the dark so many times before. Just half an hour after leaving Barcelona airport, we arrived at Ca l’Andreu, Anna’s family’s summer home.

In the dark, the large unlit masia loomed over us. Grand wooden doors sat central in the white-washed wall. A small window in the eaves was dimly lit; shadows moved about slowly inside. 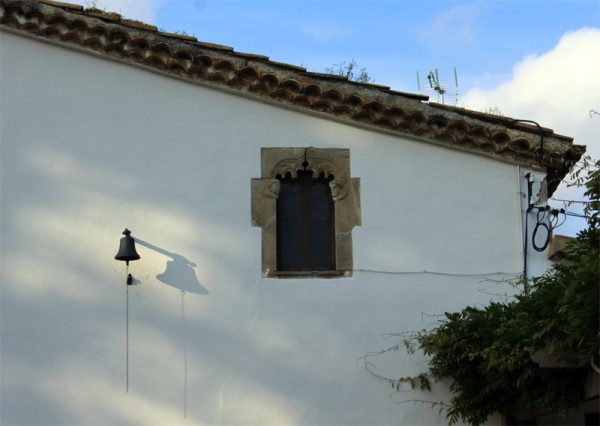 Outside it was freezing – unseasonably cold for May. I was breathing white fog and rushing to get in from the rain. This meant the idea of introducing the kids to the no-riptides, no-surf Mediterranean would have to wait for another few years.

In the light of day, it didn’t matter how cold it was outside, there was plenty to explore behind the walls of Ca l’Andreu, which was just as well because it was raining so heavily I had to squint to see the city of Badalona on the coast below.

All through the house, original Catalan beams line the high ceilings, their rough hand-cut edges and guestimated spacing lend character to an already impressive house. Magnificent examples of old Catalan woodwork decorate each room – buffets, wardrobes, writing tables and beds, and grand pieces of art give the impression that this wonderful masia is laden with history. 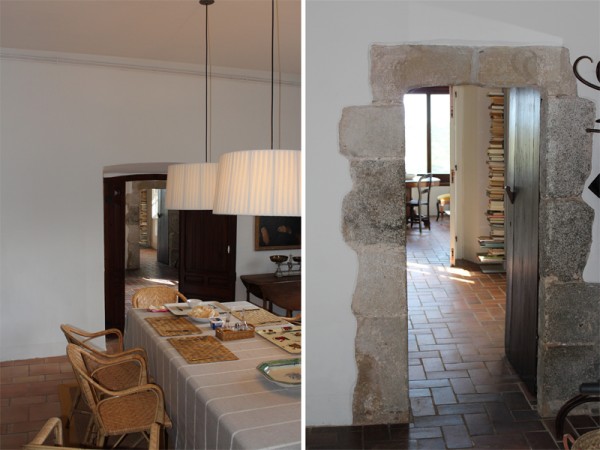 Dining room and lounge, with wonderful stonework around the door.

Named after one of the previous owners of the house, Ca l’Andreu has gone through many guises over the years, but has been predominantly used as a farm.

There has been agricultural production at the property since Roman times, or even before. The property itself is said to sit on an old Roman villa, which could ring true as many rich Romans chose only the best plots with the best views for their homes. In fact, when Anna’s older brothers were very young they discovered the remains of an old villa just below the existing house and undertook their own excavations.

I asked Anna about the history of the property:

“At the beginning of the 20th century most of the property was planted with vineyards as the Phylloxera pest devastated vineyards in France, making prices rise to record levels. Finally the pest got to Catalunya /and most of the vineyards were abandoned and turned into umbrella pine forest. When our grandfather purchased the property in the early 40s, just after the Spanish civil war, there were carob trees, horticultural production with onions, potatoes, peas, etc and the hills were planted again with vineyards until 1982, when because of high costs and the impossibility to use machinery, the hill vineyards were abandoned. Terraces in the property were producing flowers for some years, later peaches and finally in 1982 they were all planted with vineyard again.” 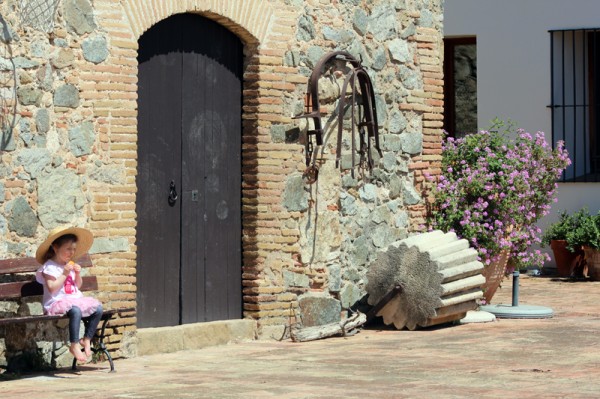 Just sitting in the sun, eating a peach.

“One of my brothers started a small vegetable garden using organic production principles. After seven years of practice he decided to take up the whole property, remove the vineyard and turn it into an organic production business. About 2.5 acres are used for mixed vegetables, 2 acres have been planted with olive trees and there is still a little more than one acre with vineyard, with white grapes from the variety ‘pansa blanca’.” 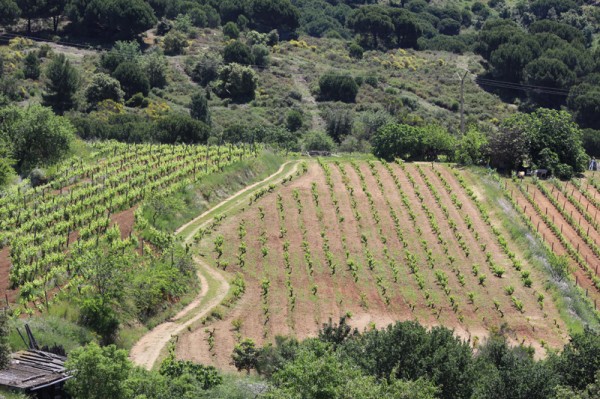 Some of the newly planted vineyards.”

“The farm is already certified by the CCPAE (ConsellCatalà de la Producció Agrària Ecològica) and our project includes convincing our neighbours to join the project. Two of them are already in the certification process and one is moving towards it. We will sell with a single brand “Hortsde l’Alegria” Horts means vegetable gardens and Alegria is the name of the church around which the farms are, and means also happiness.” 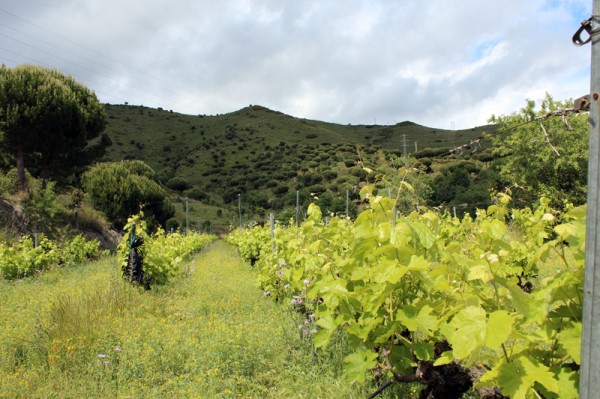 One of the small vineyards at the back of the property.

“In 2013, we have done a one year stop of production in order to reorganize ourselves and improve the quality of the land by the technique of “green manure”. In July we should start again. In the meantime, we are keeping some production for home consumption, guests and friends.”

In addition to being devout about their eco practices on the land, Anna and her family ensure all improvements and renovations done on the house are in keeping with their sustainable ideals. 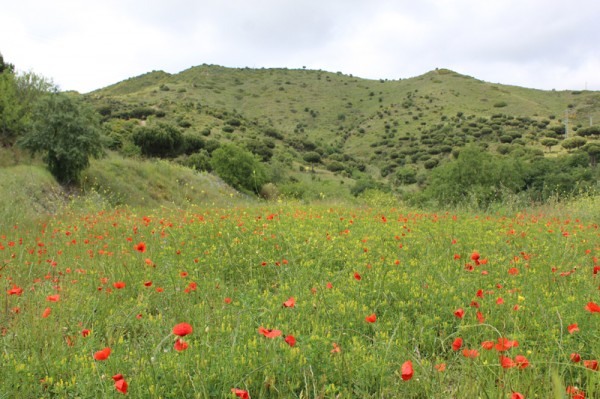 Field of poppies up behind the property.

Water comes from a well nearby, which her family drink from all the time. There is no air conditioning, and heating is used sparingly. The old Catalonian farmhouses were built to retain heat in the winter and stay cool in the summer. On the hot days, all the windows and doors closed, then opened at night to let the cool night air flow through.

Five cows wander the pastures at the back of the house, adopted to graze the area and help reduce the chance of summer bush fires, which are a regular occurrence in the hot summer. A devastating fire in 1994 razed most of the surrounding natural park to the ground; no one wants to experience that again, so they’re keen to do what they need to keep chances to a minimum. 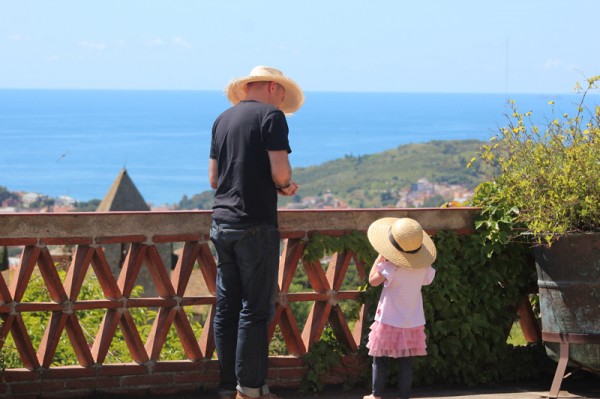 A wonderful day for wearing a hat!

Anna and her family have just started to rent the masia, meaning they don’t get to use it as much as they’d like. It must be hard, for the days we spent there, wandering the paths up to the vineyard at the back, down to the old village of Tiana and chatting to the wonderful neighbours upstairs who care for the property, it felt very much like a home. It would have been easy to settle for a while, to get involved in working the land, to explore more of Marina Natural Park and beyond. 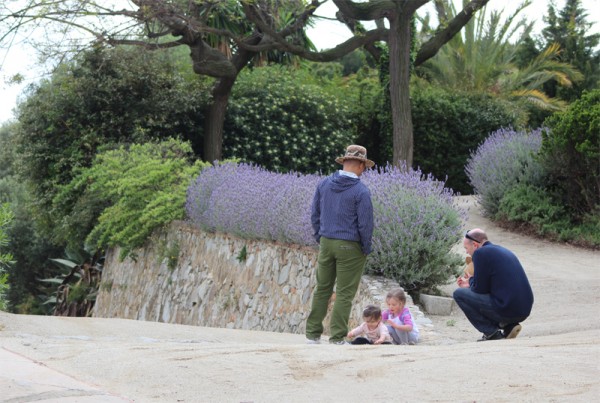 Checking out the Catalan creepy crawlies.

During the months of April and May, pilot and sperm whales can be seen off the coast. Dolphins ride the waves on the bough during boat trips from Mataró, and a little further north the Pyrenean brown bear is as elusive as ever, but worth the trek if you catch a glimpse.

And, during the last few days, when the sun finally came out, we got our view of the wonderful seething urban sprawl of Catalunya’s most-visited city, Barcelona. 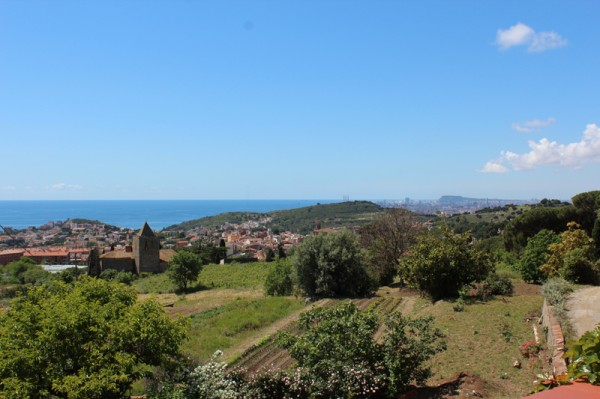 Disclosure: Many thanks to Anna and her family for sharing their home and revealing all about its history. Thanks too to her brother, Francesc Giro, who has provided a wonderful upcoming interview about his work with conservation organization Acciónatura, and to Charming Villas Catalonia, who made our stay possible.