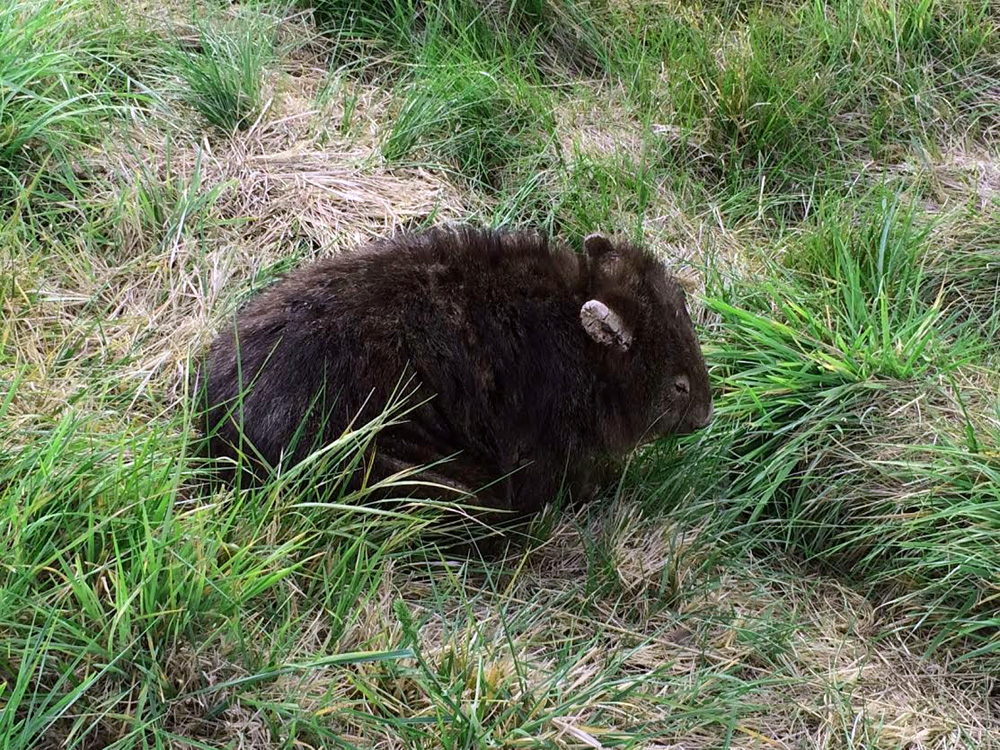 Living in Australia it’s not surprising you’ll encounter a kangaroo or two. Wallaby sightings, however, aren’t quite as common where we live, so on a recent trip to Tasmania I was looking forward to seeing the large populations of wallabies I’d only read about.

Indeed, on our drive through the Central Highlands we saw dozens of the mini marsupials. Unfortunately, mostly with their head missing, or tail or not much left at all. All roadkill. My numerous sightings of wallabies wasn’t exactly what I’d imagined. At least it was proof of a strong population, if nothing else.

After a few hours we grew accustomed to the grey mounds lying quietly by or on the road.

Until, descending from a crest in the road I spotted a moving grey mound. Or it seemed to be moving.

I asked Dan, who was driving, to slow down. He didn’t. He presumed it was just another squished wallaby.

What could we do anyway if it was another poor injured wallaby?

The mound was crawling to the side of the road.

As we got closer I realised it wasn’t a wallaby at all. It was that ever elusive Australian marsupial, the wombat!

I’d only ever seen one in the wild once before, and then I was too far away to photograph it. Not this time.

Doing a really good job of pretending not to be there, the wombat stood stock still and stared straight ahead. It was obviously scared and wishing internally for me to disappear.
Quietly and slowly, I stepped close to capture one of Australia’s native animals.

They’re strangely cute little things, but seem far too dense and heavy to be cuddly. This critter obviously wasn’t too healthy, with a fungus growing over its ears.

Deciding it should be left alone we retreated to the car, leaving it to continue on its way.

As we turned, a van quickly stopped and pulled over, knowing we had stopped for a reason. Cries of “Wombat!” in Japanese filled the air, with six people scurrying across to inspect the creature in the ditch.

Within seconds three more cars stopped; all their passengers ecstatic to see a live animal for once, or their first wombat. Who knows?

Like a comical scene from a Benny Hill episode, the growing group started chasing the wombat along the side of the road as it tried to escape the snapping entourage.

Then, from somewhere deep within, that little fungi-ridden fur ball harnessed a hidden speed and started scurrying away. Wriggling deftly underneath the wire farm fence, we rooted for it from a distance as it took off like a chocolate bullet across the field away from the pestering mob to safety.