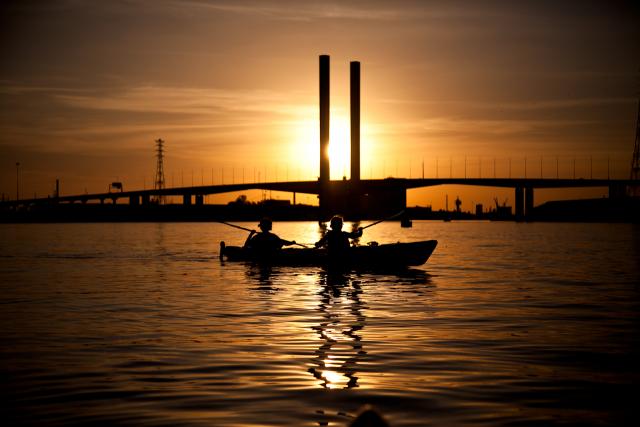 Drifting slowly along the Yarra under bright moonlight, water laps gently against the side of the kayak. I’m lulled by the rhythmic rocking of the tide. My breathing slows, keeping time with the dip and rise of the oar and I wonder why it’s taken me so long to explore Melbourne this way.

Life on the water has always appealed, even if for a few hours in a kayak. And because I’m always urging people to discover what’s going on in their own back yard, I thought it was about time to bite the bullet; practice what I preach and investigate life along the Yarra from a different perspective.

The evening tour I was booked on with Kayak Melbourne set off from the boat sheds at Docklands at 7pm sharp. It’s summer here, but it still gets dark early so you don’t have to wait too long to get a view of the cityscape at night. 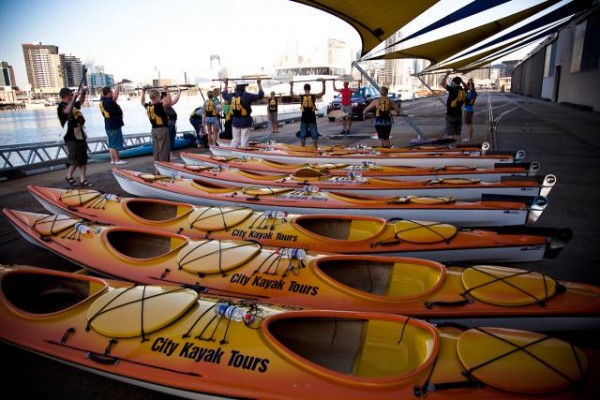 Having a quick lesson on how to steer a tandem kayak
Photo credit: Kayak Melbourne

After a five minute lesson on how to manoeuvre a tandem kayak I’m introduced to my partner for the trip, the lovely Lissa. In the throes of a whirlwind tour of Australia, like me she has never used a tandem kayak. We set off slowly, getting used to the paddles and pedals, trying hard to keep each other on the straight and narrow, quite literally. 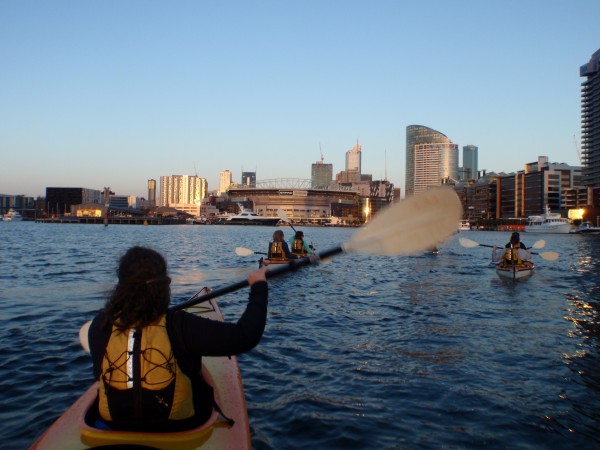 Rowing towards Ethiad Stadium and the city.

Slowly, we circle the docks in front of the Ethiad Stadium, practising our new moves and limbering up for the next few hours of paddling ahead while our guides Kent and Matt reveal little morsels of Melbourne history along the way.

The Docklands served as a main hub for migrants to the area in the 1850s and was a busy port during the gold rush in the region, but in the 1960s, when container shipping became commonplace, the existing docks were too small to keep up with demand so trade moved to bigger wharfs. The area remained relatively untouched until the early ‘90s, when it was earmarked for massive redevelopment as an urban waterfront.

Now tall, glass-shrouded skyscrapers line the docks, with only a handful of luxury yachts using the moorings. 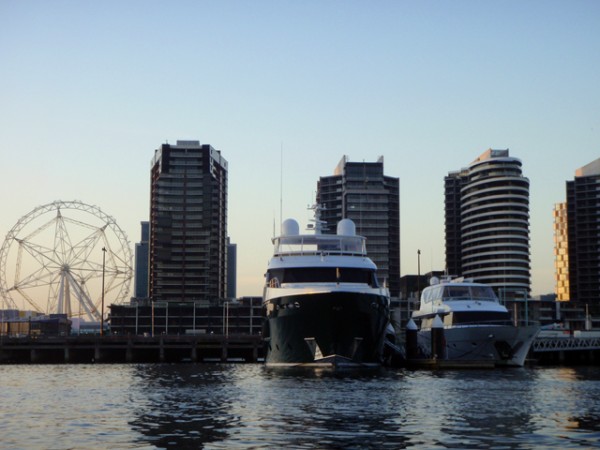 It is here we pull up, tie up and wait while our complimentary meal of good old-fashioned fish and chips is brought to our laps. It’s a chance to grill Kent as to why he left his high-powered job in the city to run kayak tours, but as the sun sets, throwing a kaleidoscope of colours across the sky, lighting the surrounding buildings in violet and orange, it’s pretty obvious why this office is a much nicer place to be. 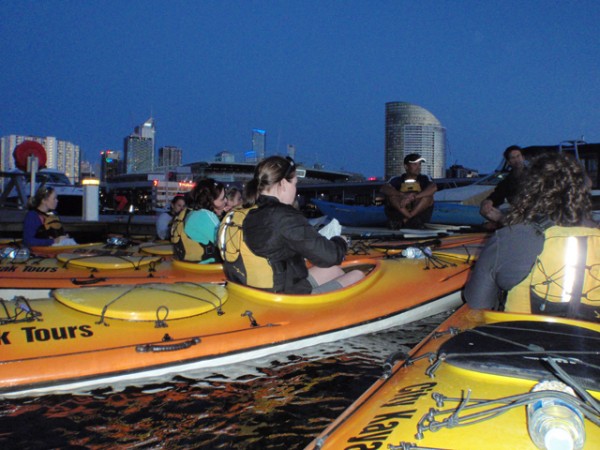 Heading off towards the Bolte Bridge, now fine silhouette in the setting sun, I’m told the towers straddling either side are not just higher than Sydney Harbour Bridge, but that they’re not even attached to it. It’s an impressive bridge from a distance, with its tall towers stretching for the sky, but somehow I much prefer the view from below. The long lines of the concrete roadways above are lit from below, giving it a 1920s Art Deco feel. 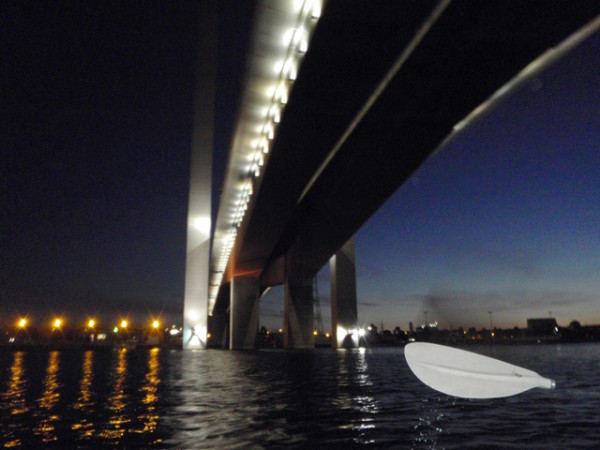 A different perspective: the long sleek lines underneath the Bolte Bridge

It just screams to be photographed. So I try, and discover it’s not so easy to take still photographs while half paddling a kayak – or rather while your partner is paddling the kayak!

After the bridge we take a left turn into the Yarra and discover just how fast we can row when we realise the lights in the distance are those of a scenic cruise heading straight for us. Like oversized ducklings, we quickly follow Matt’s lead and hug the side of the banks, trying not to capsize in the wash of the passing boat.

We had been assured at the beginning of the tour the kayaks are pretty much uncapsizable, then some bright spark pipes up, “That’s what they said about the Titanic.” Still, we manage to survive our little brush with the ripples and continue on our way.

We row past the disused warehouses that could tell a few stories of old Dockland living. The giant wooden sheds are blackened and broken with age. They sit empty, staring across to the city like worn-down old men trying to make sense of it all.

Now the only life here seems to be a few well-loved yachts and the seagulls.

We pass fancy vacant tri-level houses and lively bars and restaurants – the sprawl of the new age – until we reach the Crown casino. Here the tour stops and waits for the fire ball show that lights up Southgate every night. For some, this was the highlight of the tour. Once finished we meander at a leisurely pace on past more crowded bars and restaurants, vibrant with the usual clamour of an evening before arriving at our end point: the rowing sheds just past Flinders Station and Princes Bridge. 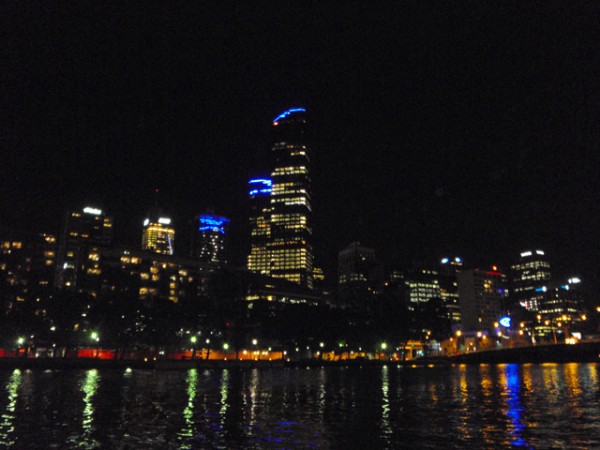 Melbourne sky line at night.
Much nicer is real life, but hard to get a good shot while paddling a kayak!

Lissa and I try and replicate Kent’s fancy parking method – taking a good run – or row – up to the ramp, but fail miserably and have to be pulled in like everyone else.

Surprised at how good I feel after three solid hours of rowing, I promise myself to explore more of my adopted hometown before all of its old heart is razed forever. And may even, maybe, take up rowing!

Disclosure: My place on the tour was complimentary through Viator, all opinions and blurry photos are my own.