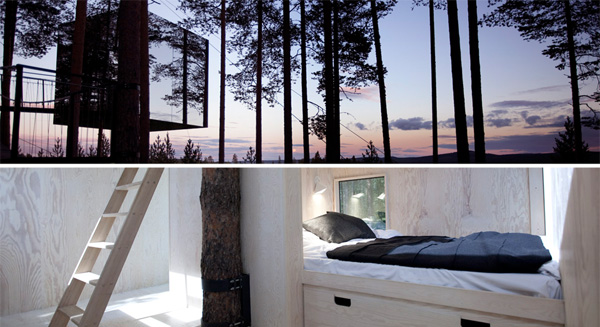 Set on the outskirts of the small Swedish village of Harads is a scene not unlike something from a 1950’s B movie.

Shimmering glimpses of UFO style constructions trick passers-by into believing aliens have finally landed. Splashes of colour and light dance among the branches on the edge of the boreal forest; buildings seem to appear and disappear with every glance.

Yet, on closer inspection suspended in the canopy of trees is nothing more than a hotel.

A very innovative and eye-catching hotel.

Inspired by the film “The Tree Lover” by Jonas Selberg Augusten, where a group of men revisit their childhoods by building a treehouse together, Sweden’s Treehotel is an attempt to relay the underlying current of the movie – how precious trees are to us, their ecological value and meaning. 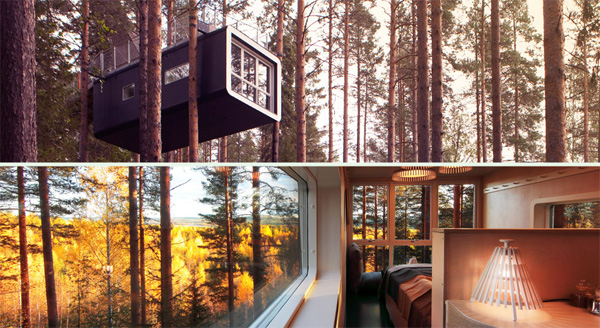 Founders Kent and Britta knew they wanted a tree hotel in some form; however their working backgrounds in healthcare, education and tourism meant that although they had imagination and a vision for their venture they lacked the design skills to put it into action.

Their answer was to invite Sweden’s top architects to design something unique that would suit their sensibilities and aspirations.

The spectacular Treehotel is the result. 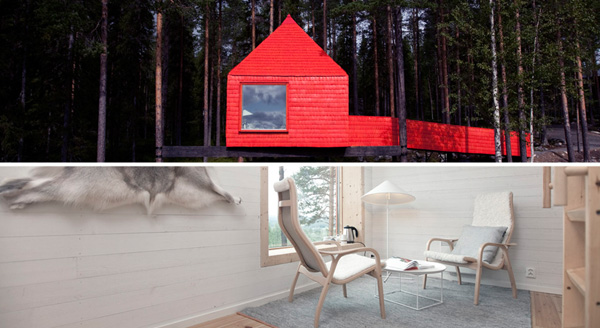 Of all of them, the Mirrorcube is perhaps the most visually impressive.

Seeming to float among the trees, this fully-reflective 4x4x4 metre cube offers a camouflaged hideaway for those who, quite literally, want to get away from it all. Mirrored exterior walls on all sides allow the boxed room to blend in with its immediate surrounds.

No one need know you’re there.

The only giveaway is a low sloping bridge on one side – the cube’s only form of access. 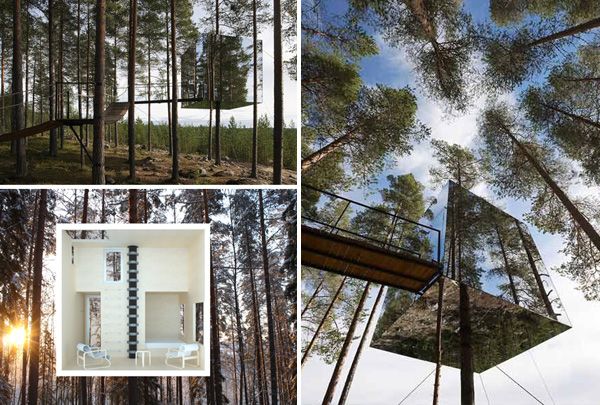 The ingenious construction is attached to the trunk of the host tree by an aluminium frame, with plywood and birch laminating the structure. Six windows, not readily visible from the outside, offer sensational panoramic views of the locale beyond.

The entire Treehouse complex was built without chopping down any trees on the site.

Instead, accommodations were built around and on the existing trees using timber sourced from local construction companies. All materials were chosen specifically to have the least possible environmental impact, as were the construction techniques. 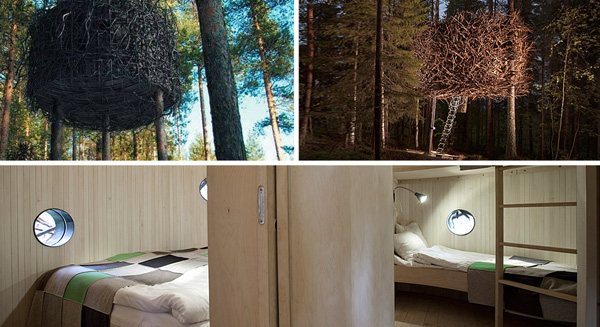 Hydroelectricity powers the site, and each room, bar the Mirrorcube, is replete with its own odourless combustion toilet, which incinerates the contents at 600°C. The Mirrorcube boasts a fancy freezing toilet – no I hadn’t heard of one either – which is electrically powered and helps heat the room during cold spells.

Visitors to the Treehotel use the facilities of Britta’s Pensionat, which is part of the whole complex.

All meals are served here, and guests are welcome to relax in the authentically decorated 1940/50’s setting. Although, recent technologies are available too for those unable to cope too long without television or internet access.

There is also an onsite bar and sauna – well, let’s face it, it just wouldn’t be a proper Swedish retreat without one, would it?