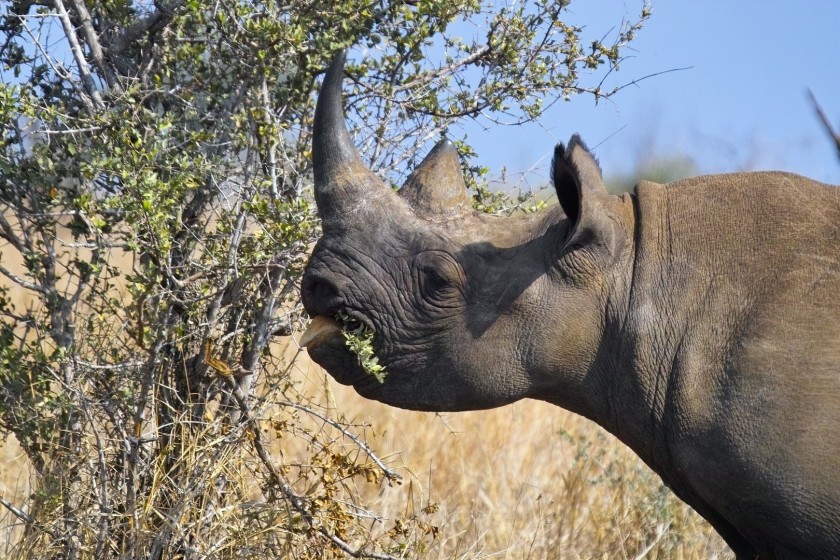 What’s got me so hot under the collar this week? No, it’s not a personal issue, well, not entirely, it’s about rhino horn. If you haven’t already seen the petition circulating the social networking sites then I’ll fill you in.

In a nutshell, rhinos are being killed en masse for their horns, and the number being slaughtered is continually increasing. 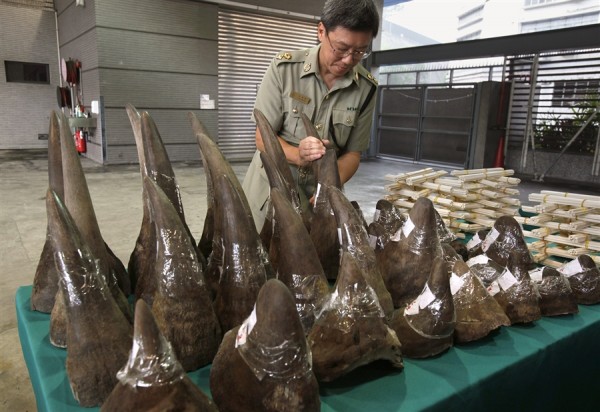 The World Wide Fund for Nature said poachers killed more than 1,000 rhinos in South Africa in the past four years. In 2007, there were only 13 killed. Considering around 20,000 white and black rhinos exist in the world, most of which are found in Africa, that number isn’t too alarming. 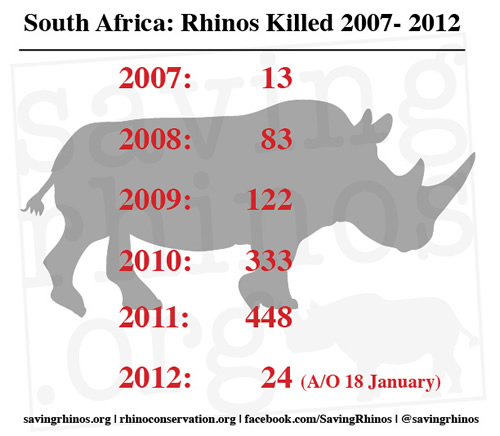 And that’s only the number of bodies that can be accounted for; poachers, being as sly as they are, no doubt manage to get away with much more damage.

Why Are They Being Slaughtered?

For centuries, rhino horn has been much sought after by the Asian medicine market as a treatment for minor ailments such as headache and fever. Yes, seriously. Have these guys never heard of plain old paracetamol?

But the current surge in rhino killings is attributed to rhino horn now being more widely declared as a cure for cancer. This misguided belief stems from nothing but hear say. And since a few Asian politicians claimed it rid them of cancer demand for the commodity has increased astronomically.

The animal’s horn is made of nothing more than keratin, the same protein as our nails and hair, which has been scientifically proven to carry no curative qualities. If the horn did in fact do something medicinally the cullings, although still reprehensible, would be more explainable.

It is the senselessness that is infuriating.

Although, rhinos can be safely de-horned – as they do in some places to deter poaching – poachers often just hack off the horn and some of the face to make a quick getaway. More often than not the rhino is left alive to deal with the pain.

Of all the rhinos found alive after their horns have been removed from the root none have survived more than 3 days.

This rhino died not long after the photograph was taken 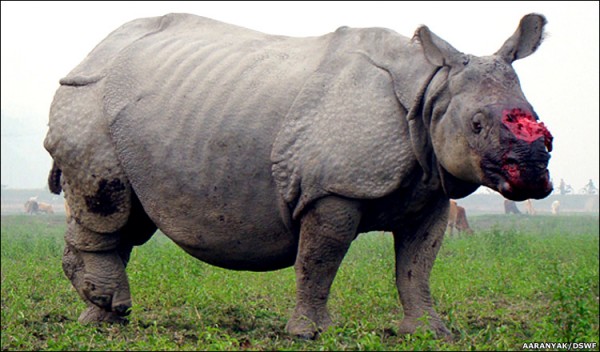 Guess How Much It’s Worth. No, Guess.

Just recently, the International Rhino Foundation estimated the price of the precious horn to be almost $57,000 a kilo. That’s more expensive than gold!

With the average white rhino horn available on the black market weighing 3.7 kilos, the profits to be made are ridiculously tempting to unscrupulous poachers.

In fact, the rhino horn trade is worth so much now it’s right up there on a par with the drugs and ammunitions trade, especially in terms of execution, sophistication and ruthlessness. Yet, little has been done to curb the trafficking in illegal wildlife products or anti-poaching operations.

“This opened the door for organized crime. Rhino poaching is an easy avenue to riches,” says Kirsty Brebner, director of the Rhino Security Project at South Africa’s Endangered Wildlife Trust.

“Some of the organized crime syndicates are seeing it as an easy option, to move away from their traditional drugs and explosives and guns and so on. It’s a low risk, high reward type of operation…”

Poaching gangs have been known to use helicopters, silent tranquilisers, body armour, night-vision equipment and mercenaries experienced in rhino tracking. There are even rumours some park rangers and owners may be involved in an attempt to make a quick buck. 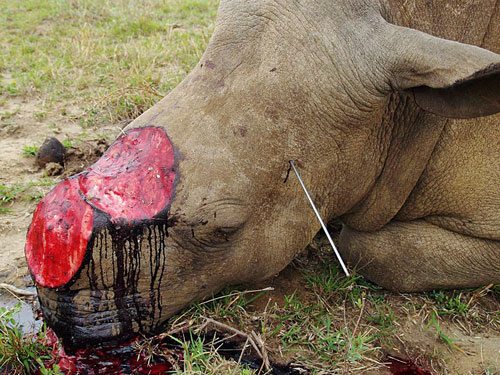 Tom Milliken of Traffic International, which monitors the world trade in wildlife products, believes the cancer cure myth could easily have been spread by the poachers to fuel demand.

He attributes the spike in killings is due in part to the fact the poachers are on limited time. People will soon figure out it does nothing so the criminals are maximising their profits while they can.

And So it Continues

Personally, I’m not convinced it will go that way.

There is still a high demand for bear bile, shark fin, tiger penis and many more animal parts refuted to do something amazing within the sphere of Chinese medicine. Their medicinal properties are continually in dispute, yet the black market remains.

The poachers will only stop when their supply is dried up and gone. Let’s hope it doesn’t come to that.

At the end of 2011, in October, Vietnam’s Javan rhinos were declared extinct due to hunting. A month later The International Union for Conservation of Nature announced Africa’s Western black rhinoceros had become extinct due to poachers harvesting its horn.

If you want to do something to help stop the poaching, then sign this petition and pass it on.

It will be delivered to President Zuma (SA) and a number of other ministers on February 22nd as part of The Rhino Ultimatum.

*UPDATE: Although the ultimatum was delivered to President Zuma in February, there has been no response to date. You can read the latest press release regarding the mandate on a dedicated Facebook page, and read the Open Letter to Zuma here.

You can continue to circulate the petition, which will stay in place until something is done to stop the poaching.