The much-publicized crash of the Costa Concordia cruise ship captured the world’s attention with startling photographs recalling the sinking of the Titanic. But for the Italian government, that crash was just the tip of the iceberg of the long-term damage done by cruise ships in Italian waters each year.

While the Costa Concordia wreck endangered marine and plant life in the Tuscan Archipelago National Park, UNESCO has expressed their deep concerns about the damage these vessels do to irreplaceable cultural landmarks, namely the city of Venice.

The Director-General of the United Nations wrote to the Italian Environmental Minister and called upon the government to develop alternative routes for the more than 650 cruise ships that pass through the city each year. 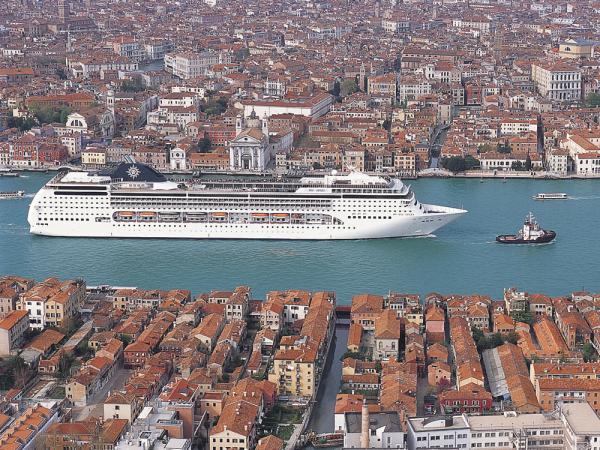 Every day, the sight of the Grand Canal and St. Mark’s Square awe passengers on up to ten cruise ships, but the appearance of their modern, white bulks from Venice’s narrow Medieval streets and Byzantine squares is a startling dissonance to visitors on the islands.

UNESCO actually prohibits modern alterations to the city, as it is a protected heritage site, but they can’t do anything about the ships, which are not permanent changes to the landscape.

When the ships dock in Venice, they keep their engines running for the entire stop in order to keep electricity and other critical systems on the ship running. This idling, similar to that of cars, emits a considerable amount of air polution.

Studies by the Venice Port Authority show that cruise ships account for 14-15% of Venetian air pollution. Engineers are working on a way for the ships to plug into an electrical grid at the docks and turn off their engines in port, but implementation of the project is still many years off. 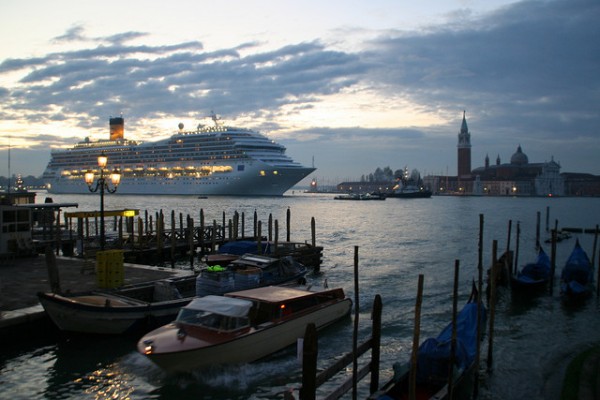 The ships’ effects on the lagoon itself are even more dire. In the 15 years that Venice has received large cruise ships, nearly 70% of the original sediment of the marsh has been sucked out in the wakes of these massive ships, according to the Venice in Peril Association.

Ironically, it was administrative meddling in the 15th century that allowed the lagoon to maintain the depths that allow cruise ships to sail through the area. Venetians rerouted rivers feeding into the lagoon to keep the waterways from silting up.

“One third of all cruise ships worldwide come to Venice each year,” the managing director for cruise traffic in the lagoon told USA Today, and they inject an extra 2 million visitors into the city annually.

Should they be banned or rerouted? What do you think should be done?