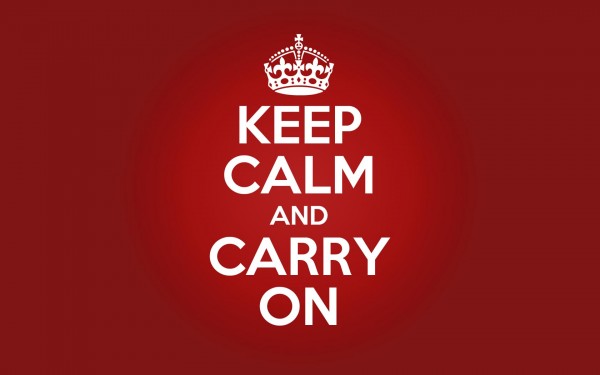 Wouldn’t it be fabulous if at the beginning of a new year everyone said, that was the best year, EVER!

It rarely happens, and although I got to the end of December thinking 2012 was pretty good… considering. It could definitely have been better! In fact, I’d say a few people may have enjoyed a nervous breakdown in the same circumstances, were they that way inclined.

This year, I learned I’m a bit of a strong bugger.

Normally, I’m not one for revealing too much about myself online – I leave that to other bloggers who are happy to share a lot more of their personal lives, and who are often much more adept at crafting inspirational messages as a result.

Me? I tend to keep my head down, “Keep Calm and Carry On.”

I had so many plans. I’m a BIG planner. And doer – normally. But this year, it seems life had BIGGER plans.

Not me, thankfully, but three people very close to me. Too close.

Back in 2007, when we were all set to move to Barcelona we instead found ourselves on a plane to Australia as Dan’s dad was diagnosed with advanced cancer. It was bad.

Not long after, my mum was diagnosed with stomach cancer.

We spent a while going over and back between families. Mum had surgery and rallied as if it was just a little blip in the proceedings, and we eventually moved to Melbourne for a while to spend precious time with Dan’s dad, as the outlook was grim.

It was touch and go for a long time, but five years later, he’s still here. Still fighting, still strong.

And I know that being here helps him keep going. He is so attached to our little girls, we need to be here.

Mum was diagnosed with breast cancer.

A month later, my Dad was told he had advanced bowel cancer.

Where was I?
On the other side of the world.

I wanted to go home so much, to be there with them. But I wouldn’t have been able to go without my two girls – who were at that stage 5 months and 2 and a bit. And the last thing my mum and dad needed were two kiddies who didn’t sleep properly interfering with their treatment and recovery.

Still, I was intent on figuring out a way to get home. It was tearing me apart not being able to be there, and made living in Australia harder than ever before. I needed to go anyway.

Then – you couldn’t make this up – at the beginning of May, my lovely, beautiful, wonderful husband was diagnosed with testicular cancer.

What the frig are you meant to do with all that emotion?

Life sucked, and then it stopped.

In milliseconds, all I could think was: I can’t lose him/ I need him/ he’s my soul mate/ he’s the other half of me/ the girls can’t lose their daddy/ what would we do/ I need to go home/ I want us to go back to Europe, where we belong/we need to be here.

Once my head stopped swirling, an amazing calmness enveloped me. Even then I thought it weird.

We just needed to get it sorted. Everything would be alright.

And you know what?

Mum, had her surgery and was well enough to visit us in September. Dad had surgery, and has just finished a gruelling six months of chemo, but is on the mend. Dan was diagnosed and treated so quickly we now joke that he only had it for two days. He had one large dose of chemo and will be checked regularly for a few years, but things are looking good.

We never did make it back to see my folks, but that’s all going to change this year. Yay! And I think we deserve it.

I REALLY need a break!

So, you see, although 2012 had the potential to be an undeniable Annus Horribilis, it wasn’t. There were many wonderful moments in the year, too; personally and professionally. And it made me realise I’m so much stronger than I ever thought I was, and more of an optimist. Or is that realist?

As for the lack of travel over the past year, I’m sure now you can see why it wasn’t a top priority. Sure, having kids can ground you for a little while, but sometimes bigger things come into play.

And although I dropped off the radar in May for a while, I wanted to keep adding articles to the site. More, I needed to write. Writing – even pithy content – is cathartic. It makes you enter another zone. It allows you to forget the real world, even for a little while.

So to those who’ve stuck around; kept coming back, kept commenting, reading, sharing and subscribing – THANK YOU!

*Stay tuned for our travel plans, and what I have in store for Eco Traveller in 2013 (although, I should probably keep it all under wraps, as you see what happens when I make plans!). Take care!