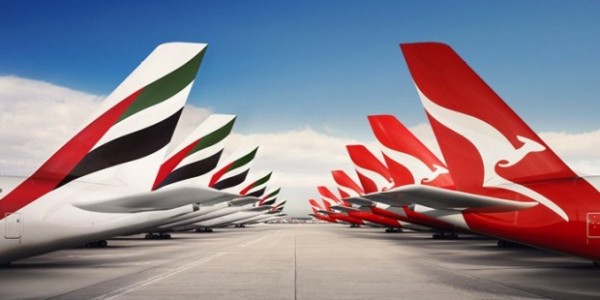 Last month, Australian airline Qantas announced a new partnership with Dubai-based Emirates. A collaboration that means Qantas is moving many of its connections from Singapore to Dubai, which will change the stop-off point for many people going to Europe to the Middle East.

It’s an exciting time for the quintessentially Aussie carrier, and those who use the airline on a regular basis; they’re going to have a whole new region to explore on layovers.

To celebrate this new business deal both airlines are holding a Gala Dinner, which I was invited to. Excitement!

The usual questions popped into my head:

At the Australian Festival of Travel Writing recently, there was a debate on the ethics of travelling today. A panel of seasoned travel writers were asked by a member of the audience whether they thought it was right to travel by plane, and if they did anything environmentally-wise to compensate for their flights.

I wish I had written down the exact question, but it was their answers that were more illuminating, and my own reaction.

And for the first time, because I now live in Australia, I realise I have absolutely no guilt about travelling by plane. I used to, but not now.

I’m originally from Europe and still have family and friends there, so of course I’m going to fly. I need to. And until I trust carbon offsetting schemes – which I don’t – I will do my bit for the environment as I always do, in ways that I know will matter… every single day. Not just for one flight.

When you live in Europe or in America, it’s possible to drive or take public transport to many destinations. If you live in Australia, it can take days or weeks to get to from one city to the next by car. You’re stuffed without air travel.

In the north of the country, where they get flash flooding during the wet season, the only way in and out of certain areas is by plane or helicopter as the roads are either impassable, or non-existent having been washed away with the rains.

Until you see Australia from above, it’s impossible to fathom the size. On a flight from Melbourne to Malaysia, it takes six hours to fly across the country. In that time you won’t see a single city. You may catch a glimpse of Alice Springs town in the centre of Australia, but other than that there is nothing but red earth stretching for hundreds of miles below. For six hours.

We need airlines to get us in and out of the country. Of course, we could all go back to grand sailing ships, but the way the cruise industry has gone, is that really a better solution?

And so, sure, I would love to celebrate with Qantas and Emirates in their new beginnings. However, I’ve had to turn down the invite. Why? Air travel between cities is so bloomin’ expensive!

But then, that’s a whole other story.

I always put a footer at the end of posts, but this time I would really, really love to hear what you think on this issue. Please share your thoughts in the comments. Thanks!